More than a week later several districts of the city remain awash with filthy water, raising the fears of outbreaks of diseases such as cholera and diarrhoea.

That storm has gathered strength again as it lingers off the northern coast of the Philippines, with forecasters saying further rains are expected in the coming days.

With more than 40,000 homes destroyed or badly damaged by the storms, he said the $74m the agency was seeking would cover the immediate needs of a million people for three months.

‘No stranger to disasters’

“This is the largest flash appeal I think we’ve ever launched for the Philippines which is no stranger to disasters, and certainly no stranger to floods,” Holmes told reporters.

According to relief groups about 400,000 people around Manila have fled to emergency shelters and cannot return to their homes until floodwaters subside.

Many survivors have had to wade through neck-high water to collect emergency food rations.

According to the UN, the flooding has also destroyed crops including rice worth an estimated $117m.

Also on Tuesday the World Food Programme said it was providing helicopters and dinghies to relief efforts in the Philippines.

“Many needy people live in areas that still remain inaccessible because of the widespread flooding,” Stephen Anderson, the WFP’s director in the Philippines said in a statement from the agency’s Rome headquarters.

The WFP said it has released some 10,000 tonnes of food for flood hit areas but has estimated the need at some 26,000 tonnes.

The Philippines often bears the brunt of the powerful tropical storms that develop over the northwestern Pacific Ocean during the annual typhoon season that lasts approximately between May and November each year.

On average about 20 typhoons and tropical storms lash the archipelago annually. 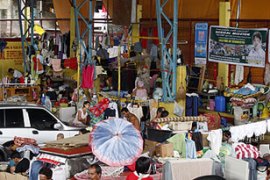 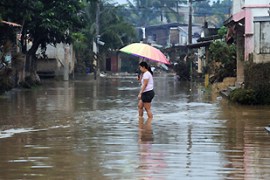 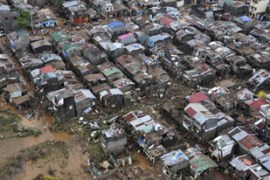