Following last week’s sudden split of the ruling coalition, a result of political manoeuvring ahead of a November presidential election, opposition parties asked parliament to hold the no-confidence vote.

On Wednesday, parliament set next Tuesday as a date for the vote which could topple Boc’s government.

Regardless of whether the vote succeeds, analysts say political instability will last until after the presidential election or well into December.

The political uncertainty follows concerns over the future of Romania’s $29.40bn aid package from the International Monetary Fund (IMF) and the government’s budget plans for 2010.

The presidential vote pits Boc’s Democrat-Liberals against both the centrist opposition and his former coalition partners, the Social Democrats.

All parties will struggle to balance meeting IMF demands with winning votes in the relatively poor European Union state.

“There are few near-term paths to a fundamentally stable political arrangement,” said Jon Levy from the Eurasia Group, a New York-based thinktank.

The IMF has asked Romania for sweeping reforms to curb salary growth in the public sector, impose controls on how tax money is spent and to clarify salary levels.

But the cuts affect a public sector which employs roughly a third of the nation’s workforce and is a crucial voter base.

On Monday 800,000 civil servants went on a one-day strike against the pay cuts.

Ruling coalition breaks up as Social Democrats quit to protest sacking of minister. 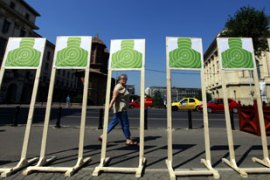