The parties, grouped under Les Forces Vives de la Nation, made the demand in an emailed statement in the capital, Conakry.

“We will only sit on the same negotiating table with the junta when these demands are met,” Oury said.

Ecowas, a regional bloc of African states, appointed Blaise Compaore, the president of Burkina Faso, to mediate between the government and opposition groups after last week’s violence.

He met both sides on Monday.

Abdul Gadr Diallo, an analyst from the Guinea Forum think-tank, told The Associated Press that the opposition group’s conditions “will make the task of President Compaore even more difficult”.

On Wednesday, Kouchner said Camara was “strongly suspected … to have participated in the decision” to launch the crackdown in Conakry.

Kouchner’s latest comments on Camara’s government came after he was asked about the crackdown by the French parliament’s foreign affairs committee.

“The least we can say is that we strongly suspect the interim president to have … taken part in the decision,” he said.

An aide to Camara accused Kouchner of carrying out a “political and media lynching” of the Guinea government and appealed to Nicolas Sarkozy, the French president, to rein him in.

“We are asking the highest political authority to ask Bernard Kouchner to show restraint. It’s very, very important,” Idrissa Sherif, an adviser to Camara, said in an interview with France 24.

Camara, who seized power in a military coup last year, insists he was not responsible for his troops’ actions.

“Was Captain Dadis responsible or not for this savage intervention by the Guinean army in the stadium where the opposition was protesting?” Kouchner asked.

“It’s hard to say, because obviously he and everyone else denies it.”

“Nevertheless, it was red berets, the forces that surround the leader of the coup d’etat,” he said, noting that Camara “still lives in the military camp and not in the presidential palace”.

Kouchner said many of the soldiers responsible were “Foresters” – residents of the Guinee Forestiere region of south-eastern Guinea – and that he had heard they were “recently reinforced by Liberian troops, former mercenaries”.

Liberia is investigating the allegation.

The French foreign minister’s comments came amid a wave of international condemnation following the crackdown.

Hillary Clinton, the US secretary of state, condemned Guinea’s government on Tuesday and called for Camara to give up power and apologise to Guineans.

She said the US would take “appropriate actions” against Guinea’s government.

“It was criminality of the greatest degree and those who committed those acts should not be given any reason to expect that they will escape justice,” she said.

Camara initially said he would not run in elections scheduled for January, but recently indicated that he may have changed his mind. After the deadly protest, he banned all gatherings and demonstrations. 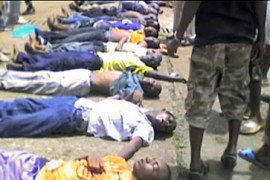 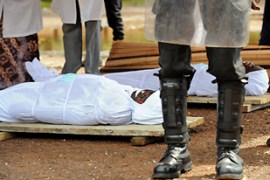 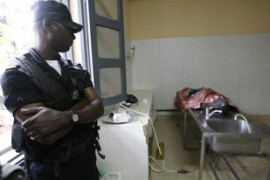 Opposition leaders say the call is a tactic to divert attention from crackdown on protesters. 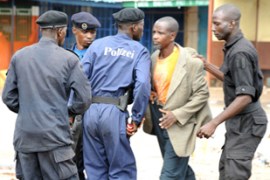