Colonel Parinya Chaidilok, an army spokesman, said the explosive weighed 30-50 kilogrammes and was hidden in a car with a fake licence plate, which had passed a screening by a bomb detection machine.

“The bomb was hidden in the passenger car and detonated by radio signal,” he told AFP.

Both incidents occurred in Sungai Kolok, a popular town nearest to the Thai-Malaysia border which has been the target of repeated bombings by separatists in recent years.

Earlier on Tuesday, four gunmen on motorcycles shot and killed a rubber tapper as he travelled to work in Narathiwat province.

That same night in neighbouring Pattani province a home-made bomb injured a police officer and six volunteers at a security checkpoint.

No one has claimed responsibility for the attacks.

On Monday evening a bomb hidden in a motorcycle parked next to a bank was set off during a Buddhist festival in Pattani, injuring 17 people, five of them seriously.

Violence in Thailand’s Muslim-majority Yala, Narathiwat and Pattani provinces has claimed more than 3,600 lives since January 2004.

More than 340 people have been killed this year alone.

The group or groups believed to be behind the attacks have made no public pronouncements but are thought to be fighting for an independent Muslim state.

Tensions have simmered since the region, formerly an autonomous Malay Muslim sultanate, was annexed by predominantly Buddhist Thailand in the early 1900s.

The region’s Muslim population have also long complained of discrimination by the central government. 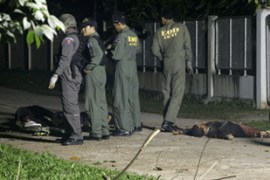 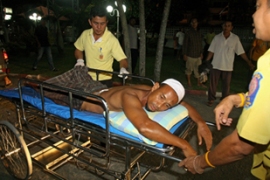