Protesters set of firecrackers and some carried banners that proclaimed: “Ultra-liberalism equals the death of agriculture”.

At one point a jittery cow used in the protest was frightened by the firecrackers, sprang loose and chased an office worker down the street before it was recaptured by the farmers.

The farmers’ major demand is that the EU limit milk production through quotas in order to drive up prices.

But ministers ended their meeting with the only concrete decision taken being to conceive a panel of experts who would have nine months in which to report back.

Padraig Walshe, the head of the Copa-Cogeca European farmers’ federation, welcomed the launch of “a debate on the  future of the EU dairy sector”.

“Milk prices have plummeted to the same level as in 1992 and many farmers are facing bankruptcy,” he said after the talks, convened by the EU’s Swedish presidency at France’s behest.

“Without any further action, dairy farmers will lose over 14 billion euros ($20.5bn) in turnover before the end of the year.” 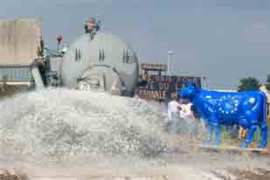