Across Europe, pundits are declaring the death of socialism, but, on the eve of a general election, opinions polls suggest Greeks may buck this trend, and vote the left-wing opposition Pasok party into power.

If this does happen, however, there is unlikely to be widespread rejoicing on the streets of Athens.

Many Greeks are sceptical about Pasok’s ability to transform their country and they simply feel that the centre-right New Democracy government does not deserve another chance.

The mood in Greece has become cynical and dark. Greeks are anxious about the economic crisis and are angered by a series of scandals and disasters that have left the government looking incompetent and corrupt.

Costas Karamanlis, the country’s prime minister, called this election only half-way through his second four-year term, in an attempt to win a stronger mandate for difficult reforms he wanted to implement to the Greek economy.

Karamanlis is right that things cannot go on as they are. The Greek economy is expected to slip back into negative growth in the second half of 2009, but the problems go much deeper than the current crisis.

The government deficit is rising, and public debt is soon expected to surpass 100 per cent of GDP.

“Everyone knows, sooner or later, that there must be changes,” journalist John Psaropoulos told Al Jazeera.

“That the safe-haven of the public sector must shrink, and that we must become more flexible.”

To that end, the prime minister is promising two years of tough austerity measures if he is returned to office.

However, he appears to struggle when pressed to explain why he has failed to enact meaningful reforms during the previous five years.

For his part, George Papandreou, the Pasok leader, is promising a stimulus package to revive economic growth, generous spending on infrastructure, and above-inflation salary rises for Greece’s bloated public-sector.

The economy has dominated the election campaign. But the sense of ennui and drift in Greece has been compounded by other factors.

A series of financial scandals have damaged the government, but have also reduced respect for the whole political class (both Karamanlis and Papandreou come from families that have played a prominent part in Greek politics for many decades).

The dramatic riots of December 2008, which began when the police shot dead a 15-year-old boy in central Athens, exposed a widespread sense of disillusionment and alienation among many young Greeks.

Since the riots, extreme left-wing groups have revived an urban bombing campaign, shot dead one policeman, and severely injured another.

And in late August, thousands of hectares of forest on the edge of the capital were destroyed in a huge fire.

Many Greeks complained that the official response was poorly co-ordinated, and that the government had not learnt the lessons of the devastating fires of the summer of 2007, which killed more than 60 people.

There is another issue nagging away at the Greek consciousness; immigration.

In 2008, almost 150,000 illegal Asian and African immigrants were detained in Greece, many of whom were trafficked into the country by gangs operating from Turkey.

Greece has come under strong criticism from human rights groups, as well as the United Nations, for its clumsy response to the crisis.

In particular, organisations point to the inhumane conditions under which immigrants are often detained, including many children, and the failure to identify genuine asylum-seekers.

The Greek government says the criticism is unfounded, and that other European Union countries should be doing more to help.

But, at a time when many Greeks perceive that public services like health and education are under threat, it is the far-right Popular Orthodox Rally party which is likely to benefit at the polls.

Psaropoulos calls this a “natural reaction, at a time of economic depression, to uncontrollable waves of illegal immigrants being trafficked into the country”.

Given all these challenges, there is one outcome from this election that Greece could definitely do without – an inconclusive result, that leads to a weak government, more political instability and even the possibility of new elections in the near future.

Greeks of all political persuasions agree that their country is in urgent need of a clear sense of direction. 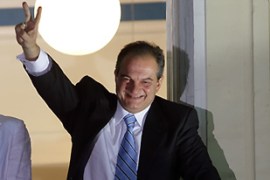 Conservatives seek a fresh mandate to deal with the economic crisis. 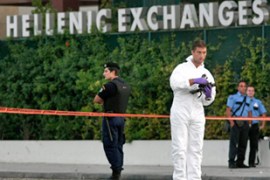 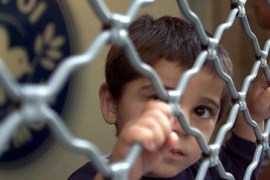 Fire destroys large parts of a camp for illegal migrants, leaving many homeless.