But Ali Shirzaidan, the Iranian atomic organisation’s spokesman, said ElBaradei’s two-day visit had “no connection” with western governments’ condemnation of the news Tehran was building a second enrichment plant.

Speaking to the Fars news agency, Shirzadian noted that ElBaradei’s visit was planned prior to the Geneva talks.

Shirzaidan was also reported as saying ElBaradei would discuss “more co-operation” and how fuel could be provided for Tehran’s research reactor.

Iran’s English-language Press TV reported that ElBaradei would not visit the Qom facility during his trip.

Western powers suspect Tehran is making an atomic bomb under the guise of its civilian nuclear work.

Iran denies the charge, saying its nuclear programme is for civilian purposes only.

Meir Javedanfar, an Israeli nuclear expert, said that Iran’s revelation of its second nuclear facility had heightened tensions between Iran and the West.

“But I think both sides will be looking to restart their co-operation because they both have to gain something from it,” he told Al Jazeera.

“I think Mr ElBaradei will be testing Iran’s response to the visit by the IAEA inspectors. If the Iranian government is going to co-operate and if the IAEA is going to recognise that co-operation then I think relations between the two sides would increase.”

The proposed IAEA inspections come amid mounting international pressure on Iran over its uranium enrichment programme, including a demand by Barack Obama, the US president, for swift and “constructive” action following the Geneva talks.

Obama warned his patience for dialogue was limited, saying he now expected IAEA inspections of the new plant to begin within two weeks.

The talks in Geneva ended without agreement on the idea of “freeze for freeze” – a suspension of further enrichment in return for a halt to additional UN sanctions against Iran.

But Washington conceded that the Geneva meeting, which included the highest-level direct talks between the US and Iran in three decades, marked a “constructive” start to defusing the nuclear standoff.

However, the agreement is only in principle, with the technical details set to be worked out at an IAEA meeting in Vienna on October 18.

“Iran’s actions are based on honesty. We did not have any secret work because we gave information [about the new plant] ahead of time” to the IAEA, Ahmadinejad said. 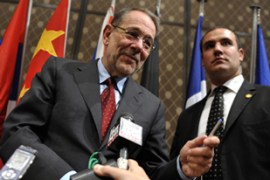 US steps up plans to engage Tehran as diplomats gather for talks in Geneva.