With aid supplies beginning to arrive in force in Padang on Friday, more heavy equipment was visible around the worst hit parts of the city as rescuers raced to search for survivors trapped in the rubble of collapsed buildings.

However, Indonesia’s health minister said far more help was needed and issued an urgent call for more foreign aid in the form of rescue and recovery equipment, as well as medics to treat wounded survivors.

“We need help from foreign countries for evacuation efforts. We need them to provide skilled rescuers with equipment,” Siti Fadilah Supari told reporters in Jakarta.

“Our main problem is that there are a lot of victims still trapped in the rubble. We are struggling to pull them out.”

Rescue and relief teams from the army and health ministry, along with local residents, have battled frequent downpours and the threat of aftershocks to hunt for survivors in the twisted wreckage of collapsed schools, hotels, shopping malls and other buildings.

The city’s main hospital was also damaged and tents were erected nearby for medical staff to treat the constant stream of injured needing assistance.

Emilzon, a medic, said hundreds of people had been treated for broken bones, head injuries and trauma.

“We are running out of doctors and nurses because we are overwhelmed with patients,” he said.

Al Jazeera’s Step Vaessen, reporting from Padang, said medical teams and military aircraft had been arriving with field hospitals, tents, medicine and food rations, but there did not appear to be enough equipment to conduct rescue operations.

The authorities admitted there was a desperate shortage of heavy machinery as police and soldiers clawed with bare hands through the tangled remains of buildings.

Yudhoyono, who returned on Thursday from the US where he attended the UN General Assembly, flew to Padang to oversee the relief effort and to ask people to pray for a miracle to help the city.

He told emergency services to be prepared for the worst, saying it was “better to overestimate than to underestimate”.

“It is better to send more enforcement, especially in emergency aid… which can help those who are still buried in the rubble.”

Sri Mulyani, the finance minister, said the government had allocated $25m for a two-month emergency response.

She said the region and its infrastructure had been “damaged seriously” and warned that this would badly affect Indonesia’s economic growth, as West Sumatra is a main producer of crude palm oil.

The 7.6 magnitude undersea earthquake struck on Wednesday evening, about 50km from Padang, flattening hundreds of buildings.

Dozens of aftershocks followed, as did a 6.8 magnitude earthquake that struck on Thursday morning, about 225km southeast of Padang, causing widespread panic and badly damaging houses but causing no casualties in Jambi, another Sumatran town.

Padang, the capital of Indonesia’s West Sumatra province, sits on one of the world’s most active fault lines along the so-called Ring of Fire.

A massive magnitude 9.2 quake on the same fault in 2004 triggered the Indian Ocean tsunami that killed more than 220,000 people in Indonesia, Thailand, Sri Lanka and India among other countries.

Padang itself was badly hit by an 8.4 magnitude quake in September 2007, when dozens of people died and several large buildings collapsed. 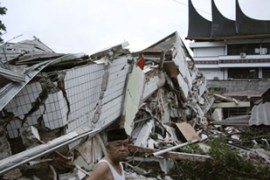 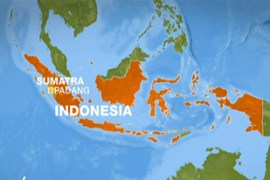