Police said they used “progressive force” and not guns to clear a road blockade in Ecuador’s southeast after Indians wounded police with pellets, Jalkh said.

“We declare ourselves in permanent mobilisation,” Humberto Cholango, a Shuar Indian leader with Conaie, said, blaming Correa for Wednesday’s violence.

Conaie split with Correa after he refused to grant Indians the right to veto concessions granted to companies exploiting natural resources on their lands under a constitution approved last year.

The laws are expected to be passed by the national assembly, which is controlled by Correa’s party and its allies.

The confederation called for a blocked of highways in Morona Santiago on Monday to protest proposed water, oil and mining laws that they say threaten their lands and will privatise water resources.

It called off the protests the same day, amid limited turnout, but regional Amazon Indian groups under Confenaie continued the blockades.

Correa has called Indian groups infantile for opposing the laws and denies that there are plans to privatise water resources.

Across the Andean region, Indians are fighting governments that are pushing ambitious oil and mining-led development plans.

In Peru, a government crackdown at an Amazon road blockade left at least 23 police and 10 Indians dead in June.

The Indians were protesting a series of pro-investment decrees issued by Peru’s government to open their ancestral lands to oil and mining projects.

There have also been sporadic clashes in Chile where the country’s largest Indian tribe is pushing for political autonomy by occupying farmland and burning farm machinery. 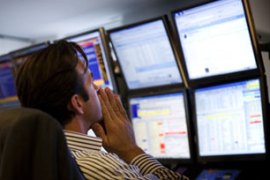 Ecuadorean president tells UN summit that IMF and World Bank should be dissolved. 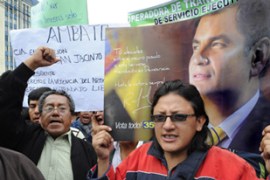