She said the firing of rockets from Lebanon “could mean the opening of a second front” in the war on Gaza which has left at least 700 Palestinians dead.

The Israeli military has been on alert in the north since it intensified the Gaza offensive, which it says is aimed at stopping rocket and mortar attacks by Palestinian fighters in the Gaza Strip.

“We took into account there would be an attempt by Palestinian groups to express solidarity,” Shalom Simchon, an Israeli cabinet minister, said.

Lebanon is home to more than 400,000 Palestinian refugees, according to UN figures.

“The residents of the home are very distressed by what has happened,” he said. “People here haven’t got to the stage they have in the south where many people have left their homes.”

The Palestinian Hamas group, which has been targeted by the ongoing Israeli aerial and ground assault on Gaza, denied it carried out the attack from southern Lebanon.

“Hamas is pursuing its combat inside Palestine and our principle is not to use any other Arab soil to respond to the occupation,” Raafat Morra, a Hamas spokesman, told the AFP news agency.

Tarek Mitri, Lebanon’s information minister, said the Hezbollah movement, which fought a war with Israel in 2006, had made it clear it was not behind the rocket attack.

“Hezbollah has assured us that they remain committed to stability and Resolution 1701 and that is a euphemism for saying they are not involved,” he said, referring the UN Security Council resolution that ended the conflict.

The last time Katyushas were fired from Lebanon was in June 2007. Hezbollah denied responsibility and Israel blamed an unnamed Palestinian group.

Andrea Tenenti, a spokesman for the UN peacekeeping mission in Lebanon, told Al Jazeera it was “taking immediate measures to identify the perpetrators of the attack”.

“Additional troops have been deployed on the ground and patrols have been intensified across all our areas of operation to prevent any further incidents,” he said.

On Wednesday, Hassan Nasrallah, the leader of Lebanon’s Hezbollah, warned that “all possibilities” were open against Israel as he gave a speech condemning Israel’s offensive in Gaza and voicing support for Hamas.

About 1,200 mostly Lebanese civilians were killed as the Shia Muslim movement fought the Israeli military.

Addressing tens of thousands of supporters via video link at his stronghold in Beirut’s suburbs, Nasrallah said: “I say to [Ehud] Olmert [Israel’s prime minister], the loser, the vanquished in Lebanon that ‘you cannot overcome Hamas or Hezbollah’.”

The comments marked the first time he has spoken so openly on the possibility of a renewed conflict with Israel since the war in Gaza began on December 27.

Nasrallah warned that the 2006 conflict would be “but a walk in the park” compared to what awaits Israel if it launches a new offensive on Lebanon.

“We have to act as though all possibilities are real and open [against Israel] and we must always be ready for any eventuality.

“We are ready to sacrifice our souls, our brothers and sisters, our children, our loved ones for what we believe in.” 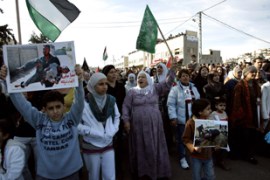 Protest rallies continue throughout the world in condemnation of Israeli assault on Gaza. 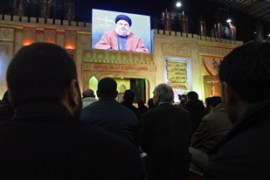 Leader says Israeli forces along border with Lebanon may be preparing an attack.