In the northern Israeli town of Sakhnin up to 150,000 Israeli-Palestinians have protested against Israel’s offensive.

Crowds waving Palestinian flags and brandishing pro-Palestinian placards chanted “Gaza will not surrender to the tanks and bulldozers!” and “Don’t fear, Gaza, we are with you!”

Thousands of police were deployed on the outskirts of the town and across northern Israel following a number of violent protests against the Gaza operation in recent days.

Ghanaim said: “The Israeli occupation forces is conducting crimes in Gaza before the eyes of the international community. We call for an immediate stop to the Gaza offensive.”

He also said Gaza fighters should halt their rocket fire against southern Israel.

Mohammed Barakeh, an Israeli-Palestinian politician, said the Sakhnin demonstration was “our answer to the Israeli threats against the Palestinian people in Gaza”.

“We are determined to stand alongside our brothers in Gaza to stop the bloodshed and massacre,” he said.

Some protesters in Sakhnin called Hosni Mubarak, Egypt’s president, a “coward” and accused him of “collaborating with the Americans”.

In Europe, demonstrators have taken place across Britain with the biggest rally in London.

Marchers on the event organised by the Stop the War Coalition were to leave old shoes for Gordon Brown, the country’s prime minister, at his Downing Street residence, in the spirit of an Iraqi journalist who threw his shoes at George Bush, the US president.

Speaking to Al Jazeera, Alexei Sayle, a British writer and entertainer, said: “I think we should withdraw our ambassador from Tel Aviv, we should call an immediate halt to European Union-Israel trade negotiations, we should start looking at a boycott of Israeli products and a boycott of Israel’s financial services.”

Protests were also held in Manchester, in northwest England, and in Glasgow in Scotland.

The march caps a week of demonstrations in London, including a rally outside Egypt’s embassy on Friday, urging Cairo to open its crossing with Gaza to allow refugees through.

Hundreds of Lebanese and Palestinian activists and schoolchildren protested in front of the United Nations building in Beirut.

One protester said he hoped the Lebanon-Israel borders would be opened so that he could go to fight alongside Palestinians.

Murad, a Palestinian refugee, said: “We want to at least be able to go and fight. We want Sayyed Hassan [Nasrallah, the Hezbollah secretary-general] to do anything to open the borders so we can go and fight and, God willing, we will be victorious.”

In Ankara, Turkey’s capital, about 5,000 people shouted “killer Israel” during an anti-Israeli rally as anger mounted in a country traditionally considered an ally of Israel.

The demonstration is the second largest in Turkey in as many days.

The protesters, who turned out in freezing weather, shouted “resist and win freedom” in support of Hamas.

Many waved Palestinian flags and wore headbands with Arabic scripts.

The fighting has troubled Turkey’s efforts to help broker peace between Israel and its Arab opponents, forcing Turkey to suspend its mediation between Israel and Syria and leading to resignations by some of Turkey’s politicians from a Turkish-Israeli friendship group. 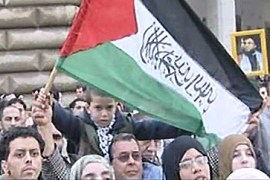 People continue to take to the streets in protest over the Israeli strikes on Gaza. 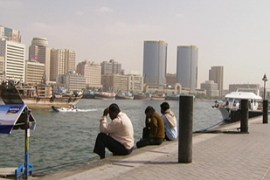 Official celebrations are called off as a token of solidarity with people of Gaza. 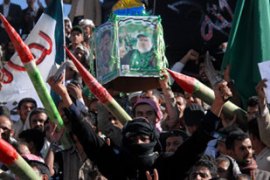 Tens of thousands protest across Middle East over Israeli bombardment.