Despite its rather unfashionable image, Scouting remains one of the most popular organised youth activities in the world.

Enjoyed by about 38 million children and young people in more than 200 countries, Scouting has a reputation for teaching life skills to its members in a fun and stimulating environment.

Yet in politically divided Lebanon, sectarian divisions are apparent even in the country’s 27 youth groups, with each political party possessing its own organisation for young people.

And Hezbollah, the main Lebanese Shia party and armed movement, is among those with its own youth group, the Imam al-Mahdi Scouts, some of whose members go on to become fully-fledged Hezbollah fighters.

Dr Bilal Naim, president of the Mahdi Scouts, told Al Jazeera that the group places importance on telling Scouts about the work of the Islamic Resistance, Hezbollah’s armed wing.

But Naim said that the group, which caters for boys and girls, also has a programme of activities similar to those of other Scout brigades across the world.

“It is similar to other Scout groups, maybe in the West – in the activities, in the costume, in the song [and] in the protocol of the Scouts,” he told Al Jazeera in the Haret Hreik district of Beirut, a Hezbollah stronghold.

He said that an “Islamic culture”, intrinsic to the group’s identity, was also taught to children across several age groups.

“We have different programmes – one for prayer, one for fasting – everything to do with Islam.”

At a meeting in Beirut’s southern suburbs, the Scouts assemble in their respective age groups and swear allegiance to the organisation before they start two hours of physical and intellectual activities.

About thirty Scouts in their early teens learn computer skills in a room full of new PCs while older Scouts (called Rangers) lift weights and batter and kick a punchbag in the main hall.

Meanwhile, in a smaller room the youngest Scouts (Cubs) have reading classes and swap notes on school homework.

But evidence of the politicised nature of the Mahdi Scouts was also on display.

Some of the younger Scouts, quite unprompted by their adult leaders, told Al Jazeera that they were already certain of their loyalty to the party.

“We want to be good Muslims and defend our land against Israel,” 14-year-old Adel Ahmar said.

His friend Hussien Hamade, also 14, said that he shared the same view.

“Al-Mahdi Scouts told us to be martyrs defending our land from all the countries that attack us,” he said.

“We should defend our country through the Islamic Resistance in Lebanon and be martyrs finally.”

Farhat Hasosoun, Scout leader of the group Al Jazeera visited, insisted that most of the Mahdi scouts’ time was spent engaging in community-based work.

“The motto is ‘together to serve’. Our Scouts work to clean places of worship, including mosques and churches,” he says.

“We also volunteer to assist those who has special needs or who have mental handicaps.”

Hasosoun says that while some Scouts go on to become a member of the Hezbollah’s armed Islamic Resistance group, there is no compunction on them to do so.

“Yes, it is continuous [that Scouts go into the resistance]. We also teach them administrative skills. We cater to an individual’s personal desires and needs,” he says.

“But it is not obligatory that everyone will join the resistance.”

The Scouts themselves say that the group provides them with the chance to take part in fun activities that they would not otherwise get the chance to follow.

“I learn about the Islamic religion here. I make ropes and we go on camps. We meet old friends and make a lot of new ones too,” Ahmar says.

Hamade says the group has taught him to value the environment and encourage other Lebanese to protect it.

“I learn to respect nature here – not to cut down trees and to put out fires after I have finished and not cause forest fires,” he says.

The Scout group was licensed by the Lebanese ministry of education in 1992 and joined the Lebanese Scout Federation six years later, but it has faced criticism for allegedly indoctrinating children.

A 2006 report by the Intelligence and Terrorism Centre at the Centre for Special Studies in Israel alleged that Mahdi Scouts are “indoctrinated with the principles of radical Iranian Islam”.

The report said that scouts in the group follow “the personality cult of Iranian leader Ali Khamanei”, Iran’s spiritual leader.

The Intelligence Centre also said that the Mahdi Scouts were encouraged to read a book entitled ‘Sharon the Evil’, in reference to Ariel Sharon, who was Israel’s defence minister during its invasion of Lebanon in 1982.

The claims of indoctrination have been rebuffed by the Scout group, which has called the report “an organised attack [which] aims at erasing the culture of the resistance,” in its own published response.

As for the contentious literature, “Sharon will always be a criminal in the minds of the Lebanese children for he has committed hundreds of massacres,” the Mahdi Scouts say.

Controversy will remain over whether the Mahdi Scouts is a simple youth organisation or a dedicated ‘feeder’ group for Hezbollah.

But for the members themselves, it is the traditional Scouting activities such as camping, fishing and team sports that encourage them to salute their Fleur de Lis twice a week.

Web site for the Imam al-Mahdi Scouts (in Arabic) 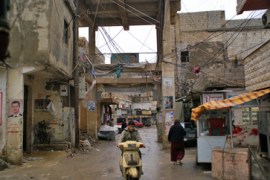 Palestinian refugees explain the importance to them of Lebanon’s presidential polls. 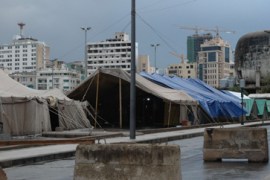