With the fall of Mullativu, which the LTTE had held since 1996, the Tigers are believed to be confined confined to 300 square km of jungle in Sri Lanka’s northeast.

Tony Birtley, Al Jazeera’s correspondent reporting from Colombo, said: “In the past … the Tigers launch a counter-offensive and hit back hard.

“But, according to the army, they are no longer in a position to do that kind of counter-offensive.

“However, the Tamil Tigers did start in the jungle 25 years ago and, as they’ve gone back to it, it’s going to be a much harder job to clear them out than it was out of Mullativu town.”

The government has expressed confidence it will soon win one of Asia’s longest-running civil wars.

“Other troops are moving towards Puthukudiruppu and others are fighting south of there,” he said.

Independent verification of the ongoing military operation is almost impossible because journalists, aid agencies and human rights workers are barred from the frontlines.

The military has made dramatic gains in recent months following a massive campaign, pushing back the Tamil Tigers, who are fighting for an independent homeland in the north and east of the island.

Earlier in January, the Sri Lankan military captured the town of Kilinochchi, the Tamil Tigers’ de facto capital in the north of the island.

As fighting has intensified, aid groups and diplomats have expressed fears for the safety of hundreds of thousands of civilians.

Aid agencies say about 230,000 civilians fleeing the fighting are trapped in the war zone. Rights groups and the government accuse the LTTE of keeping them as human shields.

At least 100 civilians were killed in artillery exchanges last week, according to a government official working in the Tiger-controlled area.

The army has set up a 32 square km safe zone, but said the LTTE had moved its artillery and heavy weapons inside it.

Asked about the civilian casualties, Jeevan Thiagarajah, the executive director of Sri Lanka’s Consortium of Humanitarian Agencies, told Al Jazeera: “We are seeing civilian casualties who are being brought by ambulance to the Vavuniya hospital, and I think at best it indicates they are very close to the fighting.” 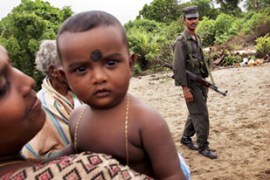 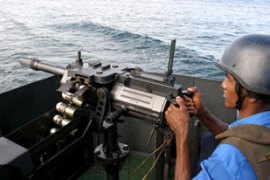 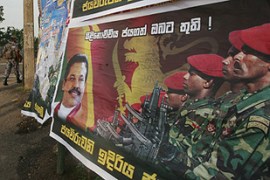 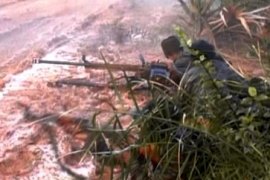