Ethiopia announced plans to withdraw its estimated 3,000 troops from Somalia last November, but only began their withdrawal early January.

At the request of the Somalia’s UN-backed government, Ethiopians were ordered to force opposition fighters out of Mogadishu, the Somali capital, in 2006.

But the troops had faced several attacks by al-Shabab, the former military wing of the deposed Islamic Courts Union (ICU) that ruled Somalia before the Ethiopian-led invasion in 2007.

Al-Shabab and other opposition groups have since regained control of much of the territory they lost to the Ethiopia-backed Somali forces, with the government only present in Mogadishu and Baidoa.

Somali legislators are expected to elect a new president on Monday following the resignation last month of Abdullahi Yusuf as president.

The Ethiopia pull-out has sparked security concerns for the war-ravaged country, where African Union (AU) peacekeepers have also come under attack by fighters.

At least 22 civilians were killed in a suspected suicide car bomb attack aimed at the AU peacekeepers on Saturday.

The fighters missed their target and rammed into a bus, killing at least 17 people. Five others were killed during the clashes.

Meanwhile, the  US has been circulating a draft UN Security Council resolution calling for a UN peacekeeping force in Somalia.

The draft would renew the mandate of AU peacekeepers currently in Somalia, but eventually replace them with a stronger international force.

The draft calls for a council decision by June 1. 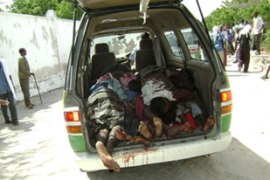 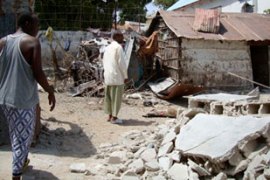