“Forty-four Americans have now taken the presidential oath. The words have been spoken during rising tides of prosperity and the still waters of peace.

“Yet, every so often the oath is taken amidst gathering clouds and raging storms.  At these moments, America has carried on not simply because of the skill or vision of those in high office, but because We the People have remained faithful to the ideals of our forbearers, and true to our founding documents.”

Hours after his inauguration, Obama addressed members of the US congress at a special lunch event, which was overshadowed by the collapse of a senator.

The American news channel CNN and other networks identified the victim as Edward Kennedy, the Massachusetts senator who is battling a life-threatening brain tumour.

“It looked like a seizure and it was painful to him [Kennedy],” Orin Hatch, a Utah Republican senator, said.

“But … as he got into the ambulance he kind of looked over at me and smiled that old Irish smile that I know [meant] that things are going to be all right.”

After the lunch, at which Obama paid tribute to Kennedy, the new president walked with his wife along Washington’s Pennsylvania Avenue as part of an inauguration parade.

Nicolas Sarkozy, France’s president, said after Obama’s inauguration: “We are eager for him to get to work so that with him we can change the world”.

Meanwhile, Gordon Brown, Britain’s prime minister, said Obama’s ascendancy to the US presidency marked a “new chapter in both American history and the world’s history.”

Obama acknowledged that the US faces several challenges, from military campaigns in Iraq and Afghanistan to economic concerns at home.

“That we are in the midst of crisis is now well understood. Our nation is at war, against a far-reaching network of violence and hatred. Our economy is badly weakened, a consequence of greed and irresponsibility on the part of some, but also our collective failure to make hard choices and prepare the nation for a new age,” he said.

“Today I say to you that the challenges we face are real. They are serious and they are many.  They will not be met easily or in a short span of time. But know this, America – they will be met.

“On this day, we gather because we have chosen hope over fear, unity of purpose over conflict and discord.”

Rob Reynolds, Al Jazeera’s correspondent in Washington, said: “Some of the things I thought were stand-out moments included his [Obama’s] call for an era of responsibility, which was a theme in the speech.

“He also said, very specifically, in something of a rebuke to the outgoing president, George Bush, that America is ready to lead again.

“Clearly the implication is that America failed to show leadership in the last few years.”

“This speech was not about what he is – a political operator – but who he is. He said it is not about big or small government, but about government that works,”

“Obama didn’t say anything about a War on Terror, which we’ve been hearing about for the last eight years, but he did say we are at war against a network which is far different to what we have heard before.”

But Robert Fisk, a Beirut-based journalist for the London-based Independent newspaper, said Obama’s speech did not highlight any wholesale shift in US strategy.

“I do not think there was a great difference from the rhetoric of Bush but we didn’t get taken through 9/11 again,” he said.

Fisk also described the speech as “very long, almost a sermon” and as being “meagre on the Middle East” because it did not reference the Palestinian issue.

“Many people in this region [the Middle East] are going to say ‘didn’t he see the pictures on TV in the last few days’… it’s the Middle East that will come back again and again and I don’t think he chose to address it,” he said.

Obama and his wife Michelle began inauguration day by attending a service at St John’s Episcopal church, which lies a short distance from the White House.

Obama then went to the White House to share coffee with George Bush, the outgoing US president, and Dick Cheney, the outgoing vice-president.

Bush and Cheney later left the White House for the last time, with Bush joining Obama in a motorcade heading to the Capitol for the inauguration ceremony.

After Obama’s inauguration, Bush and his wife Laura boarded a helicopter waiting next to the US Capitol, to begin their journey to Midland, Texas.

Central Washington DC was inundated by hundreds of thousands of people keen to witness Obama’s inauguration.

“This crowd was hanging on every word Obama was saying. At some moments, he was solemn and the crowd listened carefully. Then he talked about the US becoming strong again, and there was a lot of flag waving,” Cath Turner, Al Jazeera’s correspondent in Washington DC, said.

Grace Clark, a spectator who had travelled from California, said she had been inspired by Obama’s speech.

“It was a new beginning for me, which I was able to share with my daughter here. It gave me the sense that we allhave responsibilities of trying to make changes in the future,” she told Al Jazeera.

Torrey Pocock, a self-confessed Republican voter, said he was in Washington to witness a festival of democracy.

“For the country, given its past history [of racism], to put its trust in an African-American president is an incredible thing,” he said.

Obama’s inauguration came a day after he called on Americans to unite in the spirit of Martin Luther King Jr, the murdered civil rights leader.

“Tomorrow, we will come together as one people on the same mall where Dr King’s dream echoes still. As we do, we recognise that here in America, our destinies are inextricably linked,” he said in a statement on Monday.

“We resolve that as we walk, we must walk together. And as we go forward in the work of renewing the promise of this nation, let’s remember King’s lesson – that our separate dreams are really one.” 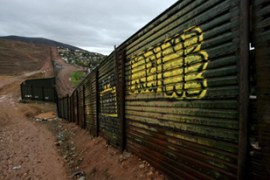 No final pardons from Bush

Two border guards have sentences commuted but no pardon for ex-Cheney aide Libby. 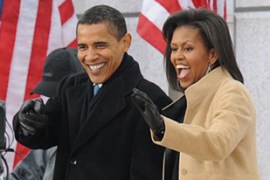 Half a million expected at festivities to mark swearing-in of 44th US president.