“It’s not an executive order closing Guantanamo Bay, but a halt to the trials for 120 days.”

The legal manoeuvrings came after a military judge adjourned the Guantanamo Bay military court ahead of Obama’s swearing-in as US president.

Prior to his inauguration, Obama had vowed to close down the detention centre, a legacy of by George Bush, the former US president.

Jon Jackson, a lawyer for one of the detainees, told Al Jazeera that the military tribunals used to try inmates at Guantanamo Bay were “against the US constitution”.

“My client says he has been tortured and I wear the uniform of a country he alleges torture against, but overall he has been respectful, and we hope justice can ultimately be served under proper circumstances,” he said.

Eric Holder, the US attorney-general choice nominated by Obama, has said the so-called military commissions lack sufficient legal protections for defendants and that they could be tried in the United States.

Navy Commander Jeffrey Gordon, a Pentagon spokesman who was at Guantanamo, declined to comment.

The military has charges pending against 21 men.

A day earlier, on Tuesday, military judges decided to press on with pre-trial hearings into the case of Omar Khadr, a Canadian national, who is accused of killing an American soldier in Afghanistan, as well as the five men charged with orchestrating the September 11 attacks.

But as the hearings got under way, judges had acknowledged that the trials might be suspended following Obama’s inauguration. 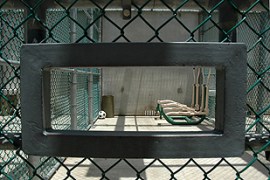 Hearings held at special tribunal, despite concerns about the prison camp’s future.