But there have been disagreements over how the aid will find its way into Gaza, with countries including Saudi Arabia concerned about giving funds directly to Hamas, which currently administers the Gaza Strip.

“They [the Arab leaders] decided to confine themselves in a general statement to postpone differences,” Al Jazeera’s Hashem Ahelbarra reported from Kuwait.

“Saudis and Egyptians are very sceptical of [giving money to] Hamas for one reason,” he said.

“They think Syria and Iran are using Hamas to destabilise the region and provide the Iranians for an opportunity to further penetrate the Arab region.”

The question of how to respond to the Israeli offensive has divided Arab nations, with some nations calling for strong action while others prefer a softer approach.

At the Kuwait summit, Syria and Qatar held Kuwaiti-mediated discussions with Saudi Arabia and Egypt in an attempt to heal the rift.

While Qatar and Syria favour a firm stance on Israel, Egypt and Saudi Arabia have said that the conflict has its roots in the alleged interference of Iran.

At a special meeting in Doha, the Qatari capital, last week Arab countries were urged to review their ties with Israel and to suspend a 2002 Arab peace initiative.

But Arab foreign ministers prepared a different set of resolutions for approval on Tuesday, including a pledge of support for Mahmoud Abbas, the Palestinian president whose Fatah movement controls only the West Bank.

Arab leaders have also called for a framework to be set up to cement a shaky ceasefire, called separately by both Israel and Gaza on Sunday.

At least 17 Arab heads of state were attending the two-day economic talks in Kuwait while senior representatives stood in for the other five member states of the Arab League.

The summit itself was focused on accelerating economic integration among Arab states and confront the fallout of the global financial crisis.

The summit’s final session was delayed by the disagreement over the Arab response to Israel. 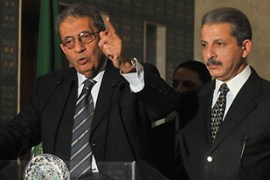