A rival contender, Ehud Barak, the defence minister, is also reportedly arguing for a ceasefire, our correspondent said.

Israeli leaders are reportedly considering Hamas’s terms for a ceasefire after Israeli envoy Amos Gilad returned from a day-long trip to Cairo where he discussed the issue with Egyptian mediators.

And Hamas’s terms appear to have softened in recent days.

The Palestinian faction governing the Gaza Strip, which had been demanding an immediate Israeli ceasefire and lifting of Israel’s blockade of Gaza, now says it will agree to a year-long truce if Israel pulls out of the territory within five to seven days.

Hamas also demands the opening of all Gaza crossings, backed by international guarantees that they will stay open.

But Hamas is not the sole faction operating in Gaza and it was not clear whether other factions were on board with the ceasefire terms.

Still, Ban Ki-moon, the UN secretary-general, said on Thursday that he was “reasonably optimistic” that the Israelis would accept the ceasefire deal with Hamas.

However, speaking after meeting Israeli leaders in Tel Aviv, he admitted that “it may take a few more days to agree to a few more technical issues” and urged both sides of the conflict to “stop fighting now”.

Israel insists Hamas must no longer be able to smuggle in weapons through tunnels under the Gaza-Egypt border, and must end its rocket attacks on its southern towns.

Also on Thursday, Gulf Co-operation Council (GCC) leaders meeting in Riyadh, the Saudi capital, to discuss the crisis, agreed to continue deliberations at a summit in Kuwait on Monday.

The Saudi gathering came a day after Qatar unveiled its own plan for an Arab League meeting on the war to be held in Doha, the country’s capital, on Friday.

“We all know it is shameful to discuss the national and human cost of Gaza that has now been stained with children’s blood at the margin of a previously planned summit,” Sheikh Hamad bin Khalifa Al Thani, the emir of Qatar, said.

“We have renewed our invitation for an emergency Arab summit in Doha but, whenever quorum has been reached, it falls short again.”

When asked about the Doha summit, Saudi officials said there was no quorum to convene it and Egyptian officials were also planning to stay away.

But some leaders have arrived in Doha, including presidents Bashar al-Assad of Syria and Abdelaziz Bouteflika of Algeria.

Meanwhile, hopes in the Arab world that the incoming US administration under Barack Obama will bring about substantial change to US policy on the Middle East took a hit on Thursday.

Several of the president-elect’s nominees for his national security team were on Capitol Hill for their confirmation hearings and Susan Rice, nominated to be the US ambassador to the UN, made it clear that she was committed to defending Israel.

While saying “we are also gravely concerned now about the suffering of innocents in Gaza”, Rice also said that many had tried “to use the UN wilfully and unfairly to condemn our ally, Israel”.

Rice’s defence of Israel came on the day the Israeli army shelled the main UN compound in Gaza and the president of the UN General Assembly accused Israel of violating international law with its war on Gaza. 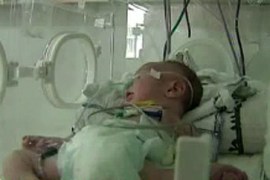 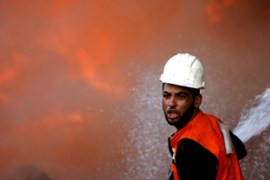 Offensive enters 21st day after millions of dollars in food and medicine go up in flames. 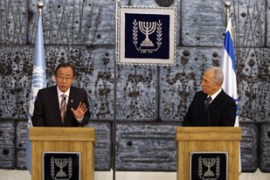 But UN chief admits deal may take “a few more days” to agree on some “technical issues”. 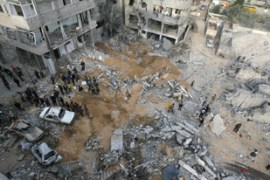 Hamas’s interior minister was killed in an Israeli air raid on his brother’s house.