“That has filtered through to public opinion with far more people coming out onto the streets in London and capital cities across Europe.

“There have been calls for the Israeli embassy to be closed down, for diplomatic ties between the United Kingdom and Israel to be broken.”

One of the protesters told Al Jazeera that she had not been able to contact her family in the Gaza Strip for five days.

“I don’t what has happened to them, are they alive, are they not alive?” she said.

The rally was backed by Ken Livingstone, the former mayor of London, who has called on European nations to withdraw their ambassadors from Israel and suspend trade agreements with the Jewish state.

Tens of thousands of people chanting “We are all Palestinians” joined a protest in the French capital Paris.

“We want to point to the hypocrisy of an international community which votes for tons of resolutions that it never enforces,” Olivier Besancenot, leader of France’s Revolutionary Communist League, said.

Elsewhere in France, pro-Palestinian rallies were held in Lille, Grenoble, Nice and Toulouse.

Engin Karahan, one of the organisers of a march in the German city of Duisburg, said the protesters wanted to show “our solidarity with the victims in the Gaza Strip, and signal our opposition to the oppression and violence in Gaza”.

The demonstrators, many from the large ethnic Turkish community, called for an immediate end to the violence and a lifting of the Israeli blockade of Gaza.

More than 6,000 demonstrators gathered in the German capital Berlin, and other rallies were held in Munich and Cologne.

Later, at least 10,000 people gathered in a park in Washington DC to voice their solidarity for the Palestinian people.

“The United States has a role to play because US weapons are being used … so we need a drastic policy change,” Cynthia McKinney, the Green Party nominee in the recent presidential contest, said.

The protesters descended on the White House, chanting “free Palestine” as protest leaders and  activists spoke from a podium.

“There are many young people. We feel it’s one of the most  important demonstrations for Palestine ever in the US,” said Eugene  Puryear, a coordinator of the Washington protest, which was  organised by the ANSWER (Act Now to Stop War and End Racism)  coalition.

They then led a march passing in front of the headquarters of The Washington Post newspaper to protest “its hard pro-Israeli  line,” Puryear said, before heading to the offices of construction equipment giant Caterpillar and military contractor Lockheed Martin.

A dozen buses filled with protesters came from New Jersey and another seven buses drove in from New York.

In Montreal, some 2,000 pro-Palestinian demonstrators chanted  “Israel the assassin” and called for a ceasefire in the impoverished  Gaza Strip.

Some brandished dolls spattered with red paint that they said represented children killed by the Israeli army.

Several hundred protesters also gathered in front of the US embassy in Mexico City in opposition to what they called the “criminal aggression” in Gaza.

Some protesters set shoes ablaze and hurled them against the embassy gates.

Almost 20,000 demonstrators carrying Lebanese and Palestinian flags marched through the streets of the Lebanese market town of Nabatiyeh in a rally organised by the Hezbollah group, which fought a 34-day war with Israeli in 2006.

“Gaza is the nation’s battle,” read one banner carried by the demonstrators.

Hundreds of thousands of people have taken part in protests that have been staged every day since Israel began to bombard the Gaza Strip 15 days ago.

In the city of Ramallah in the occupied West Bank, hundreds of Palestinian children took to the streets calling for an end to the war.

“It is a big voice … that supports our citizens in Gaza against the Israeli massacre.”

Several hundred people rallied outside the Israeli embassy in the Australian capital of Canberra, throwing shoes at the building and chanting “Free Palestine”. 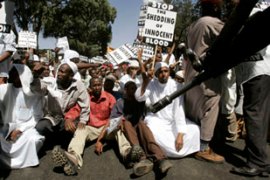 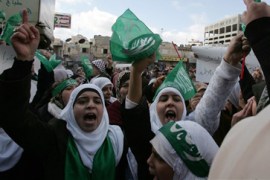 West Bank Palestinians say they feel powerless in the face of Israel’s offensive. 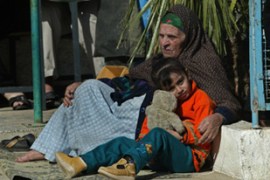 Analyst says Hamas rockets are not the cause but a response to the occupation. 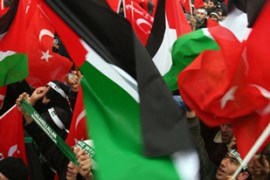