“Some areas have been flattened and the tsunami had brought a lot of sand onshore, so there have been reports the sand has covered some of the bodies. So we need specialised machines to search for bodies that are buried under the sand.”

Jason Smith, the head of communications for the International Federation of the Red Cross, told Al Jazeera: “Across Samoa, 60 villages, nearly 15,000 people have been directly impacted.

“The Samoa Red Cross is working hard through five evacuation centres to provide people with safe places to stay and access to clean water.”

“So much has gone. So many people are gone,” he told the Australian news agency AAP. “I’m so shocked, so saddened by all the loss.”

Amateur video footage showed villages that had been obliterated, homes reduced to splinters of metal and wood, while cars were stuck in the wreckage of buildings and treetops.

At least 22 people have been confirmed dead in American Samoa, about 100km east of Samoa, but that number was widely expected to rise.

Michael Sala, the homeland security director in American Samoa, said the number of dead “could go much higher” and that “it could take a week or so before we know the full extent”.

Witnesses said cars were swept out to sea and buildings were destroyed in what the US territory’s delegate to congress said was a scene of “devastation”.

The eastern part of the island was left without power and water supplies.

Barack Obama, the US president, vowed to help survivors in the faraway territory.

“I am closely monitoring these tragic events, and have declared a major disaster for American Samoa, which will provide the tools necessary for a full, swift and aggressive response,” he said.

In Tonga, south of the Samoan islands, at least seven people were confirmed dead and three missing after tsunamis caused “serious damage” to the northern island of Niuatoputapu.

“According to information gathered from Niuatoputapu so far, seven people are confirmed dead, three missing and four with very serious injuries,” Lord Tuita, the acting prime minister, said in a statement.

“It is reported that the tsunami did serious damage to the village of Hihifo, which is like the capital of the island.”

“The hospital on the island is reported to have suffered major damage; telephone communication has been cut as a result of damage to equipment and facilities on the island; homes and government buildings have been destroyed.”

Government officials chartered a plane to assess the damage but were unable to land on the island, which was reportedly hit by four-metre-high waves destroying up to five per cent of its buildings. 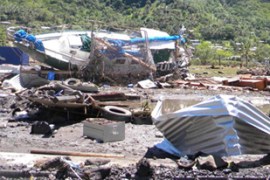 Officials say more than 100 may have died after strong quake triggers 5m-high waves. 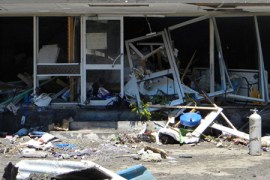