“We have responded to the spirit of this document and examined all of its components and our Egyptian friends listened to our opinions.

“[Egypt] will invite all the Palestinian parties and factions in the course of the month of October to engage in dialogue in order to endorse this reconciliation.”

The Egyptian proposal focuses on security in the Gaza Strip, political prisoners associated with the rival factions, elections in June 2010, and a committee that would ultimately oversee the three previous issues.

Ayman Mohyeldin, Al Jazeera’s Gaza correspondent, said: “Unofficially, other Palestinian factions, while some have had reservations, have expressed this proposal as being the most solid one.

“This is the seventh round of negotiations that have taken place on the issue, and it was significant that Meshaal and the high delegation of Hamas travelled to Cairo.”

The two factions have been bitterly divided since Hamas took control of Gaza more than two years ago.

Meshaal said all parties will now need to see the final proposal, which was being drawn up by the Egyptian mediators. 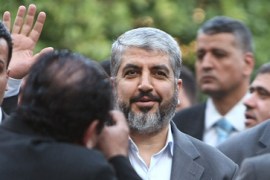 The search for Palestinian peace

Inside Story discusses Hamas, Fatah and another attempt to achieve Palestinian unity. 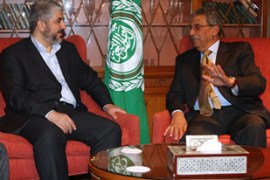 Khaled Mashaal says elections should be held only once his group makes peace with Fatah.