Among the dead were nine people killed in the mountainous province in Kon Tum where vicious winds and heavy rains triggered landslides and felled houses.

The typhoon made landfall at 2pm (0700 GMT) about 80km south of Danang, Vietnam’s fourth-largest city, the national flood and storm committee said.

Earlier flights to and from Hue and Danang were cancelled while residents reinforced their homes and carried valuable items to shelter.

More than 170,000 people have been evacuated from the areas considered most at risk.

Fishing boats have been ordered to return to port.

Ketsana was upgraded to a typhoon shortly after moving over the Philippines into the South China Sea.

Forecasters have said winds are likely to strengthen as the typhoon makes landfall and there is concern that it could cause severe flooding.

Disaster officials said some of the victims were hit by falling trees while others were struck by power cables.

Nguyen Minh Tuan, a provincial disaster official, said: “The rivers are rising and many homes are flooded, and several mountainous districts have been isolated by mudslides.”

Some flooding was reported in Hoi An, a Unesco World Heritage site in Quang Nam province, but there was no serious damage.

As the storm approached Laos on Tuesday evening it started to weaken and the rain
had stopped along some parts of the coast.

But river levels were still rising and more rains are forecast for the region on Wednesday.

Truong Ngoc Nhi, the vice-governor of Quang Ngai province, south of Danang, said: “There’s a blackout across our entire province. Streets are strewn with fallen trees and utility poles. It looks like a battlefield.” 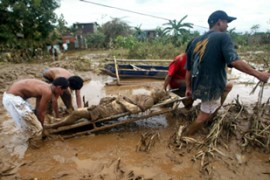