However, the ministry said France, which sold weapons systems worth $12bn in 2000, was struggling to maintain its world ranking in an increasingly competitive market.

“France has had trouble holding on to its position” since the start of the decade, the ministry said in its annual report published on Monday.

Sarkozy led an arms export delegation to Brazil this month, which finalised a deal to buy four conventional submarines and is pondering whether to buy French Rafale warplanes, built by Dassault Aviation.

“We are getting away from the classic idea that France only exports to the Middle East and we are doing what is necessary to respond to the needs of Europe, Asia and Latin America,” Laurent Teisseire, a defence ministry spokesman, said.

Brazil and France signed a defence accord in December last year worth up to $12.6bn, including the supply of 50 EC725 Super Cougar helicopters built by EADS subsidiary Eurocopter.

Morocco was France’s second-largest client in 2008 with a contract to buy FREMM frigates built by a state-controlled company.

France has seen its defence exports come under pressure for most of the decade after it struggled to repeat the success of Dassault’s previous generation of Mirage warplanes with the multi-role Rafale, which has not yet found a buyer.

France suffered an embarrassing setback at the end of the previous year when Morocco snubbed a French offer of Rafales in favour of Lockheed Martin F-16 fighters, prompting Sarkozy to order a shake-up of France’s arms export system.

In third place last year for French arms sales was Saudi Arabia, thanks in part to a deal to buy air-refuelling tankers converted from passenger aircraft built by EADS subsidiary Airbus. 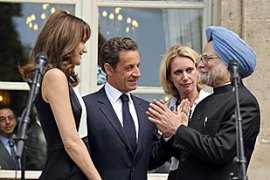 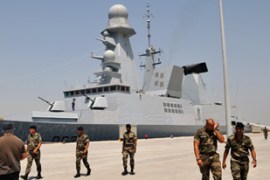 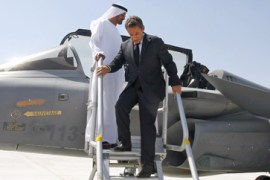 Video: France opens base in UAE