It is a beautiful September evening in Waging Am See, a town that is surrounded by the forested mountains of south-eastern Bavaria.

As the evening shadows lengthen, a crowd of several hundred people have gathered under the trees by the lakeside to hear Angela Merkel, the German chancellor, as she passes through on her election tour.

She talks about Germany’s success in combining capitalism with compassionate social welfare, and about the need for the teaching of science in schools to meet the challenges of the 21st century.

There are dissenters in the crowd – some angry farmers are holding up banners protesting about the low price of milk – but most of the audience seem appreciative of her message.

One man told us Merkel struck him as “sincere, honest, and realistic about what she can deliver”. Germany is, famously, a consensus-driven society, and the chancellor’s homely, low-key approach strikes a chord among the electorate.

This has been a low-key election campaign with one German magazine describing it as “stupendously dull”.

The timing is full of historical resonance; it is almost exactly 20 years since the fall of the Berlin Wall which led to the collapse of communism and German re-unification.

But 20 years on, most Germans are not in the mood for radical change, and all the signs seem to indicate that Merkel will be returned to power on September 27.

The real issue seems to be whether her centre-right Christian Democratic Union (CDU) party will have to, reluctantly, continue its “grand coalition” with the centre-left Social Democratic Party (SPD), or whether it will be in a sufficient position of strength to build an alternative coalition with its preferred partner, the liberal Free Democratic Party (FDP), which favours more pro-market policies.

The SPD’s leader is the current vice-chancellor, Frank-Walter Steinmeier, and as he and Merkel have worked closely together in government these past five years, it is perhaps not surprising that the election campaign has been so muted.

It is hard for the CDU and SPD to disparage each other’s policies when they share responsibility for them.

At times, Steinmeier has tried to accentuate differences between the parties by focusing on issues such as the future use of nuclear power as an energy strategy, an approach that is anathema to the German left.

The war in Afghanistan, which has recently dominated headlines, has also been an issue; most Germans oppose their government’s involvement in military operations there but only the Left Party has advocated an immediate withdrawal.

But the pivotal election issue for the electorate is likely to be the economy, and in this regard Merkel appears to be in a strong position. From Frankfurt’s Motor Show to Munich’s Oktoberfest, I have heard people express optimism that the worst of the recession brought on by the global financial crisis is over.

“The crowds here are as good as ever, we don’t even notice a difference,” said a spokesman for a Munich brewery, struggling to make himself heard over the drunken, but good-natured crowd, in a vast beer tent.

Germany’s economy has been traditionally driven by its strong export industry and nowhere has this been more felt that in Hamburg, the country’s main port city.

Claudia Roller, the port authority’s spokeswoman, said the first six months of 2009 had been “very tough”, with a 28 per cent drop in container traffic. But she said Hamburg is now seeing the first signs of a tentative recovery, driven mainly by growth in China and India who are buying up more German manufactured goods.

Despite the economic optimism, and what many believe is Germany’s slow pull out of the recession, the slowdown has been painful for many and it is still unclear how many of those who have suffered the most will decide to vote on Sunday.

In a drab spare-car parts factory outside Frankfurt, I met Horst, a blue-collar worker. He is one of the many Germans who has had to accept “Kurzabeit” terms – working less hours, for less pay, as an alternative to redundancy – in recent months.

He said his family had cancelled their summer holiday because of the shortfall in his salary. He is also pessimistic about the future; in May 2010, his Kurzabeit scheme will end.

He believes that Germany has not yet suffered the worst blow of the global economic downturn and fears that increased unemployment and market instability will surface in the months to come.

He said: “After the vote is over, we’ll see bad things.” 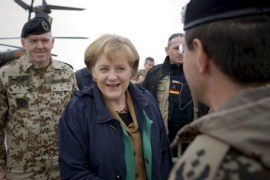 Video posted ahead of Sunday’s elections threatened an attack on Germany. 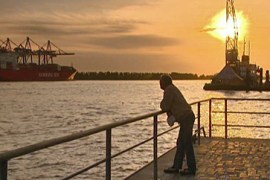 Fate of conservative government in the balance as Germany goes to the polls.