The US has also urged Arab states to provide political and economic support to Mahmoud Abbas, the Palestinian president, to lay the groundwork for a resumption in Israeli-Palestinian negotiations.

So far Arab states have resisted making concessions to Israel, saying that Israel should first impose a total freeze on the construction of Jewish settlements in the West Bank.

Binyamin Netanyahu, the Israeli prime minister, has already made clear he will not respond to such demands.

Israel’s refusal has been a major sticking point in kick-starting talks.

Egypt accused Israel of lacking the political will to enter “serious and credible” peace talks with the Palestinians.

In a speech to the 192-member UN general assembly, Ahmed Abul Gheit, the Egyptian foreign minister, said: “Throughout this year, Israel has shown lack of the necessary political will to engage in serious and credible negotiations that aim at reaching a final settlement to the conflict.”

He outlined Egyptian proposals urging the international community to put forward “the formula for the final settlement” and stressing the need “to ensure Israel’s commitment to halt all settlement activity”.

The freeze on Israeli settlement activity “should go simultaneously and in parallel with the negotiating track in order to reinforce the Palestinian confidence in Israeli intentions,” he said.

Egypt has been Israel’s main Arab interlocutor since the two signed a peace treaty in 1979, but the neighbours remain at odds over the peace process.

Despite Israel’s intransigence, US officials said the White House wants Arab states to make “tangible” and “credible” goodwill gestures towards Israel, despite the Israeli refusal.

“We’re don’t want to wait for the perfect package. It’s time to start negotiations now,” Jeffrey Feltman, the top US diplomat for the Middle East, said. 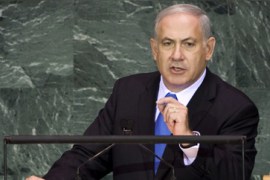 Former Arab League diplomat says Israel should acknowledge that it is an occupying power. 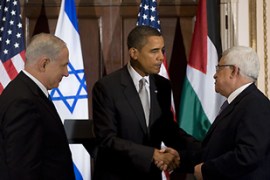 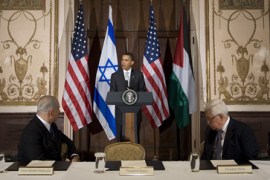