Pakistan’s army and its intelligence service, the Directorate for Inter-Services Intelligence (ISI), have long been accused of supporting armed groups fighting in Afghanistan.

But the latest warning has come from no less than the US forces’ commander in Afghanistan, General Stanley McChrystal.

In a report submitted to the Obama administration recently, he says “Afghanistan’s insurgency is clearly supported from Pakistan”.

McChrystal identifies the Shura Council of the Taliban in Quetta, in southwest Pakistan, led by Mullah Omar, as the biggest force fighting the Nato-led troops in Afghanistan.

Then there is the Haqqani network – run by Jalaluddin Haqqani – which is believed to have close ties to al-Qaeda and which uses North Waziristan as its main base.

Finally, his report says, there is the Hezbi-I-Islam, run by Gulbuddin Hekmatyar, a veteran guerrilla from the Soviet war in the 1980s.

In an interview to Al Jazeera’s Zeina Khodr, Daoud Muradian, a senior adviser at the Afghan foreign ministry, said the main factor in the Taliban’s resurgence is the support it enjoys from Pakistan’s intelligence services.

“What we face in Afghanistan is a triangle of terror – it comprises Taliban, al-Qaeda and the ISI of Pakistan,” he said.

But Imtiaz Gul, a Pakistani expert on politics and security in the tribal regions, dismissed the Afghan authorities’ allegations of a Pakistani connection as out of date.

“This was true some time ago, but I am not sure you can lump the ISI with the insurgency given their co-operation with the US military,” he said, speaking to Al Jazeera from Islamabad.

“If you went through the statement by General McChrystal two days ago, he spoke about the increasing Indian influence in Afghanistan. This is the first official expression of concern on the Indian involvement inside Afghanistan.”

He said that “if Afghanistan remains destabilised … we cannot have a stabilised Pakistan”. 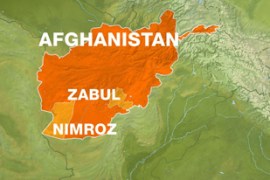 US troop deaths rise in Afghanistan

Five die in the south as Obama administration debates request for extra troops.