The airline, Asia’s largest in terms of sales, plans major cuts to its international and domestic services.

It also plans to submit further rehabilitation measures to the government by the end of this month.

Many of the world’s major airlines have announced big losses in recent months as traffic volume plunges and firms cut back on business travel.

According to the International Air Transport Association, the global airline industry could lose $9bn this year as global recession is compounded by the H1N1 virus outbreak.

Japan’s new centre-left government, voted into office earlier this month, has said that it would overhaul the restructuring process set in motion for JAL under the previous government.

But it has ruled out allowing the airline to collapse. 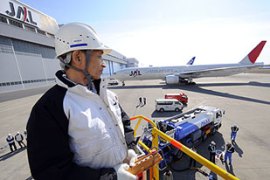