“Early this morning, our forces arrested Waleed Ayash, one of the al-Qaeda members who escaped from Tikrit prison Wednesday evening,” said a police officer in the province.

The officer said two other men were arrested in the same area, 15km east of Tikrit, where Ayash had been caught. Another prisoner had already been rearrested on Thursday.

The inmates had managed to flee through a window and scale a ladder to climb over the prison wall in a breakout which officials believed was an inside job.

About 100 guards and staff at the prison in Tikrit were being questioned on Friday.

“We suspect that they had accomplices inside [the prison] because there was such a high number of fugitives,” governor Mutashar Hussein Elewi said.

“Either that or there was some kind of negligence in the administration of the prison.”

In the aftermath of the escape, the head of the province’s anti-terror force was fired and several local security officers responsible for prisoner surveillance were arrested.

The US army said it had provided military dogs and aerial surveillance to help in the hunt for the fugitives. 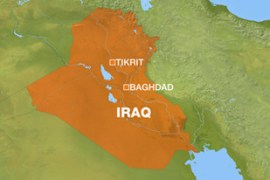