The discovery has been described as “startling” by scientists studying the moon – who have long assumed the lunar surface is completely dry.

Scientists say there is not enough water to foster life on the lunar surface – but if processed in large quantities, it might provide drinking water or fuel for future moon bases.

In a statement, Pieters said: “When we say ‘water on the moon,’ we are not talking about lakes, oceans or even puddles.

“Water on the moon means molecules of water and hydroxyl (hydrogen and oxygen) that interact with molecules of rock and dust specifically in the top millimetres of the moon’s surface.”

Jessica Sunshine of the University of Maryland and colleagues used infrared mapping from the Deep Impact spacecraft to show water all over the moon.

Separately, Roger Clark of the US Geological Survey and colleagues used a spectrometer – which breaks down light waves to analyse elements and chemicals reflecting them – from the Cassini spacecraft to identify water.

Morris Jones, a space science analyst, told Al Jazeera: “The data is a complete surprise because it goes against everything that we expected.

“We thought that the moon was bone dry in most areas, except for the poles, and the discovery was so shocking that a lot of people had trouble believing even when the data said there was water there.

“I think it’s possible to use this water for life support, for manufacturing oxygen and also for use in rocket fuel – which allows you to take off from the moon and possibly fly to other places, such as the planet Mars.

“The future of human space flight just got a lot brighter thanks to this discovery.

“And I think it provides added incentive for nations around the world to go back to the moon, explore further and develop the industrial potential of the moon.”

Paul Lucey of the University of Hawaii, who was not involved in the research, wrote in a commentary: “These reports of lunar surface water coincide with intense interest in water at the poles of the Moon.

“There may be much ‘wetter’ regions to be discovered far from the sites that have been sampled to date.

“It is also possible that rare water-bearing minerals previously observed in lunar samples, but argued to be terrestrial contamination, might be indigenous.

“Perhaps the most valuable result of these new observations is that they prompt a critical re-examination of the notion that the Moon is dry. It is not.”

Next month, the US space agency, Nasa’s Lunar Crater Observation and Sensing Satellite (LCROSS) probe, will try to detect water by deliberately crashing a large spacecraft onto the moon. 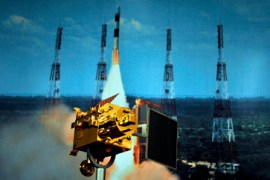 Inside Story discusses the achievements and the future of space exploration.