He said the US sought “in word and deed, a new era of engagement with the world”.

Obama highlighted the issues of “extremists sowing terror in pockets of the world … protracted conflicts … genocide and mass atrocities” as well as the proliferation of nuclear weapons, climate change and poverty as international threats.

“I say this not to sow fear, but to state a fact: the magnitude of our challenges has yet to be met by the measure of our actions.”

Obama said that his administration had taken action to alleviate international problems since taking office at the beginning of the year.

He cited ending the use of torture, closing the detainment camp Guantanamo Bay on Cuba, moving to remove US military involvement in Iraq and attempting to reduce the US’s nuclear weapons stock.

“America will live its values and lead by example,” he said, at the 64th General Assembly at the UN headquarters.

Obama said that he would “continue to seek a just and lasting peace between Israel, Palestine and the Arab world”.

He praised Palestinian efforts on security and Israeli facilitation of greater freedom of movement for Palestinians, leading to economic growth in the occupied West Bank.

“But more progress is needed. We continue to call on Palestinians to end incitement against Israel.

“And we continue to emphasise that America does not accept the legitimacy of continued Israeli settlements,” he said to applause.

“The time has come to relaunch negotiations without conditions that address the permanent statues issues: security for Israelis and Palestinians, borders, refugees and Jerusalem.

“The goal is clear. Two states living side-by-side in peace and security.”

Obama put forward four pillars that he said he believed were “fundamental to the future that we want for our children”.

“Non-proliferation and disarmament, promotion of peace and security, the preservation of our planet, a global economy that advances opportunity for all people.”

On nuclear proliferation, Obama said that international nuclear standards must be upheld or all nations and people will be made less safe.

“The actions of the governments of North Korea and Iran threaten to take us down this dangerous slope.”

He reasserted the US offer of diplomacy that aid security and peace with both nations, “if they live up to their obligations.”

“But if the governments of Iran and North Korea choose to ignore international standards. If they put the pursuit of nuclear weapons ahead of regional stability and the security and opportunity of their own people. If they are oblivious to the dangers of escalating nuclear arms races in both East Asia and the Middle East, then they must be held accountable,” he added.

Marwan Bishara, Al Jazeera’s senior political analyst, said: “Instead of war on terror we have war on unilateralism. This speech was very different from what we’ve heard from his [Obama’s] predecessor.

“Today the world has found a partner in the US and I think the US has just rejoined the world as a party willing to play, over the next four years at least

“He dedicated more energy talking about Israel and Palestine than he did on climate change to show that America remains engaged.

“The way he named North Korea and Iran on the question of proliferation, not mentioning for example Pakistan or Israel – that sort of selectivity remains within the American discourse.

“He is interested first and foremost to advance US interests, hopefully in tandem with other country’s interests.”

Ali Reza Ronaghi, Al Jazeera’s correspondent in Tehran, said: “Iranians are not going to be happy about that [the way Obama compared the government of Iran with that of North Korea]. It was like Iran already had nuclear weapons, as is the case with North Korea.

“When he said Iran should live up to its commitments to international law, it’s something very odd for the Iranians. The government says it have done all it can to comply with the demands of IAEA, the UN nuclear watchdog.

“Iran says they have lived up to their commitments … they have received very heavy sanctions [in return].”

On the Israeli-Palestine issue, Al Jazeera’s Jacky Rowland, in Jerusalem, said: “He said that America does Israel no favours when it fails to couple its commitment to Israel’s security … with an insistence that Israel respect the rights of the Palestinians.

“He made it quite clear the American support would not be blind or unconditional.”

A day earlier, Obama held talks between Binyamin Netanyahu, Israel’s prime minister, and Mahmoud Abbas, the Palestinian president, urging swift and concrete actions for peace and the resumption of negotiations on the final status of the two nations.

The meeting was the first direct talks between Netanyahu and Abbas since the Israeli prime minister took office in March, however, it appeared to yield little sign of breakthrough between the pair bar a handshake.

After the talks, Abbas said that Israel must commit to a halt in settlement building on occupied Palestinian land and recognise the borders established before Israel captured Palestinian territories in the Arab-Israeli war in 1967.

Netanyahu told reporters that there was general agreement to resume the peace process “with no pre-conditions.”

Many analysts have said that the meeting boiled down to rhetoric, citing Washington’s lowering of its past demands for Israel to halt settlement activity in the occupied West Bank, in the face of Israeli intransigence. 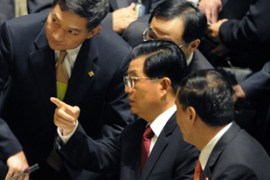 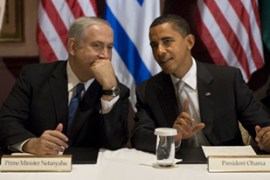 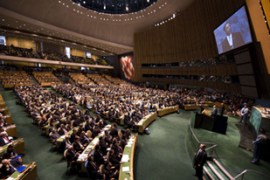 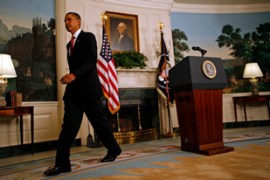