They were travelling from the Machikhel area to meet security officials in Bannu district when their convoy was attacked by Taliban fighters, police said.

The ambush followed a separate attack by Talian fighters who killed two members
of another anti-Taliban committee on Thursday in Swat valley in the northeast.

The attackers struck as members of a “peace committee” slept in the Sertelegram area, mayor Mohammad Ibrar Khan said. 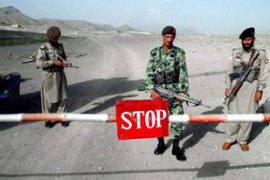