Under EU law, asylum seekers must claim asylum in the first EU country they entered.

“The pain and the agony for these people, some of whom have spent family lifesavings trying to reach Britain … is not over,” our correspondent said.

“This morning there were scenes of human misery as the riot police moved in,” he said.

One resident, Bashir, a 24-year-old English teacher from northern Afghanistan, told the AFP news agency he had paid $15,000 (€10,000) to travel to Europe through Pakistan and Istanbul.

He said: “We have no idea what the police will do, if they will take us or let us go free.

“But here we already made our place. We have our houses, our showers and our mosque,” he added.

William Spindler, a spokesman for the UN refugee agency in France, told Al Jazeera he believes the immigrants should be allowed to claim asylum in France.

“They should be given the opportunity to claim asylum in France and this is our main concern, particularly in the case of children,” he said.

“We believe the answer to this situation is a common European approach in which all countries … [should] give them the opportunity to receive international protection.

“In many cases these people have come this far, taking huge risks to their lives, without actually having had the opportunity to claim asylum or find protection anywhere.”

Despite pressure from refugee groups, Britain has ruled out taking the migrants in, with Alan Johnson, the UK home secretary, saying genuine refugees should apply for asylum in the country where they entered the EU.

Those who were not escaping persecution should return home, Johnson said, adding he was “delighted” with the closure of the camp.

Eric Besson, the French immigration minister, has said an “individual solution” will be found for each migrant cleared from the camp – whether a voluntary return home, an asylum request or expulsion – and said there would be no forced returns to unsafe countries.

Jacques Barrot, the EU justice commissioner, has reportedly demanded a change in European law to allow a “significant number” to be fast-tracked into Britain.

But French officials say the Calais “jungle” had become a haven for people-smuggling gangs and a no-go zone for local residents, with appalling sanitary conditions.

From a peak of 700 mostly Afghan Pashtuns based in the “jungle” in June, aid groups say two-thirds have fled since the government indicated it would close the camp in April.

“Most have left for Britain, Belgium, Holland or Norway, the others have scattered into thin air,” said Thomas Suel of Terre d’Errance, one of a coalition of local aid groups.

Vincent Lenoir, of the Salam migrant support group, said that of those who remained many were minors who could not be deported, or others “who simply don’t have the money or connections to leave”.

Lenoir estimates that 1,000 migrants managed to slip into Britain over a fortnight in late August and early September – following months of a clampdown by border police.

French authorities operated a centre for migrants at Sangatte, near Calais, but closed it in 2002 because of crime and accusations from London that it was acting as a magnet for migrants heading for Britain. 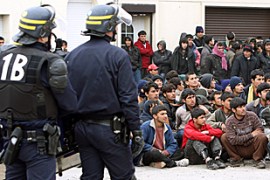 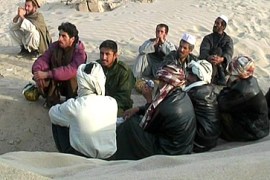 Afghans die while being smuggled out for employment abroad.