Fourteen soldiers were wounded in two days of fighting including two forward air controllers who were with ground troops to direct air raids against the fighters, army officers said.

The hostilities broke out as residents of the predominantly Muslim island celebrated the Islamic festival of Eid-al-Fitr.

Troops were tracking a 40-man group of fighters, said to be led by Isnilon Hapilon when they stumbled upon a gathering of some 220 fighters, including two Abu Sayyaf commanders – Albader Parad and Umbra Jumdail, according to Major General Benjamin Dolorfino

Two members of Jemaah Islamiyah were also believed to be with the group.

Hapilon’s group was monitored by military intelligence to have arrived on Jolo on Saturday from nearby Basilan island. Officials say Hapilon, Parad, Jumdail and their respective forces were at the camp when the fighting broke out.

The three commanders apparently escaped in the 10-hour firefight that ensued.

The camp was captured on Sunday and Dolorfino, who visited the site the following day, said that he and Abdusakur Tan, the Jolo provincial governor led the flag-raising rites over the camp “to symbolise assertion of our sovereignty over that place”.

Washington has offered a $5 million reward for Hapilon, who has been indicted in the US for alleged involvement in attacks against Americans and others in the Philippines, as well as lesser rewards for the capture of the other two commanders.

The Abu Sayyaf, which has about 400 fighters, has been blamed for numerous bombings, beheadings and kidnappings of Filipinos and foreigners.

They are also accused of receiving funds from al-Qaeda and is on a US list of terrorist organisations. The group is believed to be sheltering Jemaah Islamiyah fighters, including Umar Patek and Dulmatin.

The two fled to the Philippines after allegedly helping to plan the 2002 Bali nightclub bombings that killed 202 people. 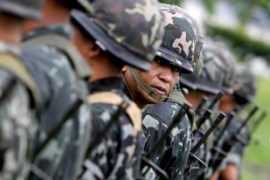