“While we have not yet reached agreement on many outstanding issues, we are working hard to do so, and indeed the purpose of my visits here this week is to attempt to do so,” Mitchell said after meeting Shimon Peres, the Israeli president.

Washington has called for a complete freeze, but the settlement issue has proved a major sticking point.

Mahmoud Abbas, the Palestinian president, has said there can be no peace negotiations while Israel continues its West Bank settlement construction.

Mitchell and Abbas are due to meet in Ramallah on Tuesday.

The race is on to secure a deal for a possible three-way meeting at the UN General Assembly this month between Netanyahu, Abbas and Barack Obama, the US president.

Jacky Rowland, Al Jazeera’s Jerusalem correspondent, said to get to that stage, Mitchell would need to make some headway on the settlement debate.

“George Mitchell does need to tie up these loose ends … Israelis haven’t yet come to an agreement and buckled down to the idea that there needs to be some kind of halt to their rampant construction in the West Bank,” she said.

“And on the Palestinian side, they need to be convinced that any building freeze by the Israelis is meaningful, and that the Israeli side doesn’t find various loopholes and get-out clauses to carry on building on the sly.”

Before his meeting with Mitchel, Netanyahu has flown to Cairo to meet Hosni Mubarak, the Egyptian president, for talks intended to focus on the peace process.

They were also expected to discuss Egypt’s efforts to broker a prisoner swap between Israel and Hamas that would include the release of an Israeli soldier held by fighters in the Gaza Strip since 2006.

“Before Senator Mitchell meets Netanyahu and before he comes to Cairo, I think that the Egyptians and the Israelis want to get together and agree on certain points,” Al Jazeera’s Amr el-Kahky, reporting from Cairo, said.

An official meeting in the Egyptian capital is unusual. Netanyahu’s last meeting in Egypt was in Sharm el-Sheikh in May 2009.

The Israeli Haaretz newspaper on Sunday quoted European Union sources saying talks would start to determine a permanent border between Israel and the West Bank in an apparent “early recognition” of a Palestinian state.

“Behind the idea … is that in any case after two years – if we [the parties] reach an agreement or if we are unable to reach one – there will be a declaration of some kind of a Palestinian independent entity,” Eldar said.

Responding to the Haaretz report, Saeb Erekat, the Palestinians’ chief negotiator, denied any talks were imminent.

“Israel releases this ‘trial balloon’, claiming we have agreed to resume negotiations,” he told Al Jazeera.

“However, I declare … as the head of the Palestinian delegation to the final status negotiations, that these reports are baseless.” 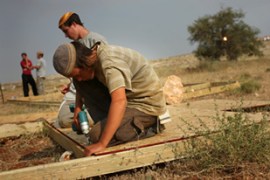