“They (Americans) asked us for a complete freeze and we told them that we will not do this,” Netanyahu was quoted as saying by a parliamentary official.

“I told the Americans we would consider reducing the scope of construction.

“But there has to be a balance between the desire to make progress in political negotiations and the need to allow inhabitants of Judea and Samaria to continue to lead normal lives.”

Netanyahu was referring to areas of the occupied West Bank.

A freeze on settlement building is one of the key Palestinian conditions for the resumption of peace talks.

Mahmoud Abbas, the Palestinian president, has said that peace talks will not restart negotiations, on hold since December, until Israel freezes its settlement activity.

Abbas was also due to meet Mitchell on Tuesday.

Al Jazeera’s Jacky Rowland, reporting from Jerusalem, said the question of settlement construction is at the heart of US efforts to bring Netanyahu and Abbas together for a meeting on the sidelines of the upcoming UN general assembly meeting.

“It’s by no means clear that George Mitchell will be able to get the two sides to see eye-to-eye, to agree to the same kind of wording,” she said.

“At the moment, it does look as though the best he can hope for is to try to narrow the gap between those two positions.”

Our correspondent said Netanyahu and Mitchell are planning to meet again on Wednesday for further talks.

“Clearly the US envoy is still hoping that he may be able to salvage something out of this round of talks,” she said.

Meanwhile, Ban Ki-moon, the UN secretary-general, also called on Israel to stop its settlement activity to allow the resumption of negotiations with the Palestinians.

Ban told Al Jazeera that the UN position on settlements is clear and powerful.

Settlement construction, including natural growth, must freeze, and that should be the basis of the start of talks with the Palestinians, he said.

Ban also told Al Jazeera he is awaiting Israeli approval to reimburse the UN for demolishing its offices in the Gaza Strip during its war there.

He said his legal advisor submitted a written application to the Israeli government after assessing the losses of the UN offices in Gaza.

Ban said he had spoken to the several top Israeli officials about the issue, and said he believes they are seriously considering the UN application. 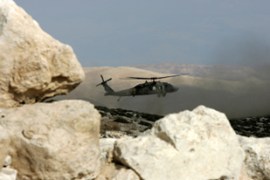 Son of Israeli astronaut who died in space shuttle disaster is killed in air crash.