However, Dubai World said on Friday that Jackson would continue to lead the company.

“Reports that … David Jackson had left the company were incorrect,” a company spokesperson said in an e-mailed statement.

A restructuring by Istithmar and its parent Dubai World may mark the most public reversal of fortune for a state-controlled investment firm since global credit markets seized up in 2007.

Dubai World has $59bn of liabilities, a large proportion of the Gulf emirate’s total debt.

The company, which owns Barneys New York, hired an advisory firm in August to help it explore options to shore up the US luxury chain’s financial position.

Dubai World is also trying to persuade bank creditors to restructure up to $12bn of its loans, an indication that the emirate is starting to grapple with the challenge posed by its $80bn-plus debt pile.

Bankers close to the talks say Dubai World is gauging interest from about 10 banks for a restructuring of outstanding syndicated debt and bilateral loans for the holding company as well as Nakheel and Istithmar.

Hit hard by the credit crisis, Dubai, one of the UAE’s seven emirates, is showing signs of recovery on the back of global economic optimism.

However, restructuring Dubai’s government-linked debts remains a top priority as the government seeks to assure a rebound for its trade, tourism and services-focused economy and recover from the precipitous property crash.

Speaking to Al Jazeera on Sunday, Robin Amlot, managing editor of CPI Financial, based in the emirate, said: “Dubai is not oil-rich. It’s a service economy. And as all service economies it has suffered in the global retrenchment that we have seen in the last two years.

“And what has happened with Istithmar World is an extension of that.

“They invested in banks, yacht marinas, Las Vegas property, Barneys high-end fashion in New York – all of which have been vulnerable areas.

“We are not staring into the abyss anymore. Business is still carrying on, companies are starting to hire again. The thought that we were going to fall into a black hole is falling away.” 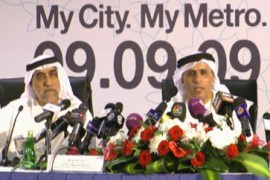 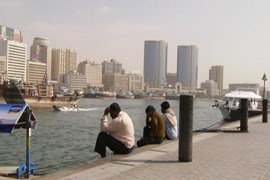 Dubai is set to slow down building spree to combat rising debts.