But she said that the EU’s targeted sanctions against Zimbabwe would not be lifted until human rights abuses ended.

Mugabe has frequently blamed his country’s problems on EU sanctions that include travel restrictions and the freezing of assets belonging to himself and his allies.

“Sanctions are serving no humanitarian purpose, they are causing lots of suffering among the people right at the bottom,” he said following his meeting with the EU delegation.

The EU maintains that mismanagement and a poor human-rights record – rather than sanctions – are behind Zimbabwe’s strife.

Ayesha Kajee, the programme director for the International Human Rights Exchange, said that the removal of sanctions would have little effect on Zimbabweans.

“I believe that lifting sanctions won’t have any significant impact on the man in the street because the sanctions currently in place are … targeted at high-level government ministers and people within the government,” she told Al Jazeera from Johannesburg in neighbouring South Africa.

“However, it has been a convenient scapegoat for Mr Mugabe and his government to lambast the West and the European Union.”

The EU has backed Tsvangirai, whose appointment as prime minister under a South African-mediated power sharing agreement was supposed to bring an end to Zimbabwe’s political turmoil.

A year after the unity accord was signed, things have improved in Zimbabwe, but power struggles over government posts and claims of the continued persecution of Tsvangirai’s supporters have made Western states reluctant to provide direct aid to the country.

“Compared to December last year, when things were really bad in the country … there’s now food in the shops – it’s expensive, but at least people can afford it,” said Haru Mutasa, Al Jazeera’s correspondent reporting from Harare, the Zimbabwean capital.

“In terms of water, which caused a major cholera outbreak a few months ago, it is slowly coming back to some of the homes in Harare at least.”

Mugabe said that he had established a “good rapport” with the EU officials and that “it was quite a friendly meeting”.

Just one day earlier he had lashed out at “bloody whites” for meddling in Zimbabwe’s affairs, but later said his problem was with Britain, Zimbabwe’s former colonial ruler, and not the West at large. 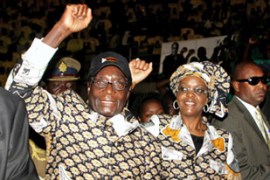