Although weak, Casumlum spoke to reporters in a military hospital in southern city of Zamboanga, recalling how the ferry “tilted so we started to disembark, first my husband then I. I just had to grope my way.”

“I just prayed and prayed,” she said.

An air, land and sea search will continue for the lone missing passenger, and a special coast guard ship has been deployed to check signs of an oil spill, officials said.

Admiral Wilfredo Tamayo, the coast guard chief said an investigation will begin later this week to find out why the vessel sank off the southern province of Zamboanga del Norte.

Tamayo also said other passenger ferries of the Aboitiz Transport System, which owned the sunken vessel, will be confined to port so that their seaworthiness could be checked.

The Superferry 9 set sail from General Santos in the south on Saturday and was headed to Iloilo city in the central Philippines.

Officials said on Monday that the successful rescue effort was largely due to help given by two passing cargo ships and military planes and gunboats who are based about 70km away from where the ferry sank.

Tamayo said there was no sign that terrorism played any part in the sinking.

Fighters from the Abu Sayyaf group bombed another Superferry in Manila Bay in 2004, setting off a fire that killed at least 116 people.

Last year, a ferry rapidly overturned after sailing toward a powerful typhoon in the central Philippines, killing more than 800 people on board.

In December 1987, the ferry Dona Paz sank after colliding with a fuel tanker, killing more than 4,341 people in the world’s worst peacetime maritime disaster. 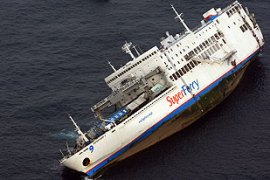