The court on Tuesday also ordered McDonald’s to pay $2,900 in costs to McCurry, which its owners say is short for “Malaysian Chicken Curry”.

“We are very much relieved. We hope to expand. This is what we wanted to do from the beginning and we were stalled for eight years,” said P Suppiah, the owner of McCurry.

“I am so happy … we have nothing in similarity with them at all. That’s how we have felt all this while,” said his wife and co-owner, Kanageswary.

In an emailed statement to Al Jazeera, a spokesman for McDonalds said: “We respect the finding of the court and beyond that have no further comment.”

That April ruling, supported by the federal court, said McCurry’s logo and signboard were substantially different from McDonald’s red and yellow “M” logo popularly known as the golden arches.

It also said that as McCurry served only Indian food it was not competing with McDonald’s Western menu.

McDonald’s, which began operations in Malaysia in 1982 and has 185 outlets in the country, first sued McCurry in 2001.

Sri Devi Nair, the lawyer for McCurry, said the ruling means McDonald’s does not have a monopoly on the prefix “Mc”, and that other restaurants could also use it as long as they distinguish their food from McDonald’s.

“This is a precedent for everyone to follow,” he said. 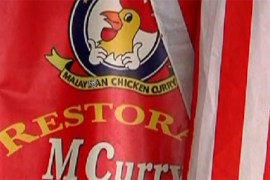 An Indian restaurant in the Malaysian capital has McDonald’s demanding it change its name.