“I ran to the site and saw five burning cars and a child who was thrown by the explosion and landed on the top of a car,” he was reported by The Associated Press as saying.

“I tried to approach him to see whether he was alive or dead, but the police started to open fire in all directions and we had to run away,” he added.

In another suicide attack on Monday, a man dressed as a policeman killed four people and injured 20 more after detonating his explosive vest next to a Shia mosque in Baquba, the capital of Diyala province, police said.

Worshipers were gathering for evening prayers at the time, in the city 65km northwest of Baghdad, the capital.

A separate incident also occurred in Kerbala, a mostly Shia city 80km south of Baghdad, where a bomb exploded on a bus.

Ramadi was once a key al-Qaeda stronghold following the US-led invasion of 2003, but violence has significantly decreased since 2006, when local tribes sided with the US military.

Sporadic attacks still continue in the province, with a series of bombings in July prompting Iraqi security forces to declare a state of emergency there.

Diyala province has remained restive while other areas of Iraq have seen levels of violence fall.

The withdrawal of US forces from towns and cities in Iraq at the end of June had raised concern that the country would see a renewed surge in violence.

Over the last two months Iraq has seen a number of deadly attacks, including a bombing at government ministries in Baghdad in August that killed almost 100 people.

There have also been a series of attacks in areas of northern Iraq where tension is high between Arabs, Kurds and other minorities.

The violence has shaken public confidence ahead of national elections in January. 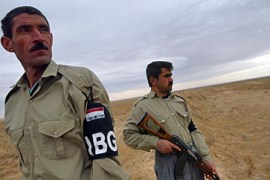