Drivers fear traffic chaos in Samoa as they prepare to switch from driving on the right-hand side of the road to the left.

The small South Pacific nation of 180,000 people is set to change lanes on Monday, the first country to do so in nearly 40 years.

The government has banned the sale of alcohol for three days and declared a two-day public holiday as a precaution, until people get used to the changes.

The government wants to bring Samoa in line with Australia and New Zealand and to encourage some of the 170,000 expatriate Samoans there to ship used cars – with right-side steering wheels – home to relatives.

Opponents of the switch to drive on the left, including the People Against Switching Sides (Pass) movement, argue Samoans were inadequately prepared for the change and necessary road improvements had not been carried out.

Lefau Waikaimoana So’onalolole, the president of Pass, said that, while the group accepted the inevitability of the changeover, it wanted a postponement.

“The efforts to prepare for the road switch are nowhere near completed,” he said, saying necessary roadworks had not been finished.

“Not only that, but I believe there is much work to be done in educating everybody about the switch.”

Experts predict the changeover will lead to more accidents on roughly surfaced roads, which are often fringed by high vegetation.

Thousands in Samoa, a largely devout Christian nation, have left it to fate, praying for a changeover “free of injury and, heaven forbid, death”, an editorial in the Samoa Observer newspaper said.

Bus companies have threatened to go on strike because the government refused to pay the cost of changing the exit doors to the opposite side of their vehicles.

However, most resistance has reduced since a court late last month overthrew a legal challenge to the switch and the country has largely supported the bid to ensure a smooth changeover.

The speed limit was reduced from 56 kilometres an hour to 40, while speed bumps were installed in many busy areas. 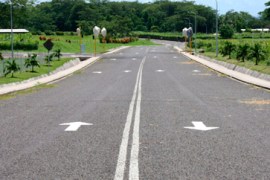 Pacific nation of Samoa switches from driving on the right to left.