An offshoot of Shia Islam, Zaidis are a minority in mainly Sunni Yemen but form the majority community in the north, some of whom want a return to the imamate overthrown in a 1962 coup.

Andrej Mahecic, a spokesman for the UN refugees’ agency, stressed that the “humanitarian crisis is unfolding in Saada … the situation is deteriorating by the day”.

Meanwhile, the military has launched a second phase of its operation Scorched Earth in the Harf Sufyan region in an attempt to reopen the road between the Yemeni capital Sanaa and Saada that has been cut for three weeks.

The escalation comes after an offer of truce from Zaidis led by Abdul-Malik al-Houthi was rejected by the government.

“The so-called ceasefire initiative announced recently by the rebels offers nothing new,” said an unnamed spokesman for Yemen’s high security commission, which is supervising the military operation.

Among Sanaa’s demands are the withdrawal of rebels from official buildings, the reopening of roads in the north, and the return of weapons seized from security services. The Huthis have already rejected these demands.

There is no official figures of casualties, but the situation is unlikely to improve quickly. Ali Abdallah Saleh, the Yemeni president, says the army needs several more weeks to crush the rebellion. 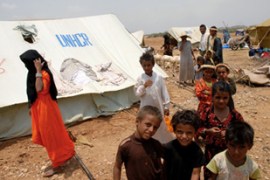