Three other soldiers were given life sentences by military courts for the attack. They will eligible for parole in 10 years.

A fourth soldier received a 27-month jail sentence for keeping watch while the other soldiers carried out their attack at the Janabi family home.

Green was tried in a civilian court after being discharged from the army due to a “personality disorder” before his role in the crime came to light.

Green said that his actions were “really messed up and wrong,” but he told the prosecution “you still don’t know what happened. You weren’t there.”

“All I ever did was what they told me to do,” Green said, adding that former Specialist Paul Cortez, the group’s ranking soldier, “ordered all of this.”

“You all can act like I am a psychopath or a sexual predator or whatever,” Green said.

“But if I had never gone to Iraq I would never have got caught up in anything like this.”

Green’s lawyers had argued that he should have been sent home from Iraq after he complained on several occasions that he was under stress and had a desire to kill Iraqi civilians.

But prosecutors said that Green was responsible for “a planned, premeditated crime which was carried out in cold blood.”

During the trial, Cortez and another soldier said that the group put on black clothing and masks to look like insurgents, before heading to the house of a girl they had spotted.

They told the court that Green took Janabi’s parents and sister into another room and shot them dead as two of the other soldiers in the group raped her.

Green raped the 14-year-old girl before shooting her dead. The soldiers then set alight a kerosene-soaked blanket that they had placed on Janabi’s body. 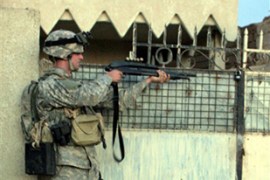 US soldier gets life for Iraq rape

Ex-soldier who raped 14-year-old girl and killed her and family avoids death sentence.