The helicopter carrying Reddy, who is a member of the Congress party, a bodyguard, two officials and a photographer, disappeared in bad weather on Wednesday.

The aircraft lost contact with air traffic controllers about 45 minutes after take-off.

A massive search was quickly launched, focusing on an area where Maoist fighters are active and about 275km south of Hyderabad, the state capital.

MK Narayanan, the national security adviser, ruled out the possibility of Maoists bringing down the helicopter, saying a technical snag or pilot error could have occurred.

“A Naxal [Maoist] strike seems extremely improbable. I would almost entirely rule it out,” he said.

Reddy was on an inspection tour of various rural social welfare programmes.

Hamish MacDonald, Al Jazeera’s correspondent reporting from New Delhi, said: “The indications are that there was no foul play involved in the disappearance of the aircraft.” 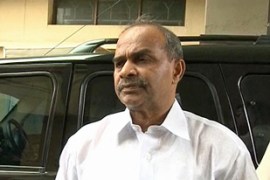