They include a visit by a senior Shanghai Communist Party official, as well as a visit by Chinese banking delegation, which officials in Beijing said had been called off at the last minute due to a “technical reason”.

On Monday, in comments likely to irritate China, the Dalai Lama urged Taiwan to preserve its democracy while maintaining its ties with Beijing.

His comments, during a visit to the typhoon-devastated village of Hsiaolin, appeared to contradict assurances that his stay in Taiwan would steer clear of political issues.

“You enjoy democracy,” he said, addressing a crowd of several hundred amid a landscape of jagged boulders and twisted, upended tree trunks.

“That must be preserved. No matter what political party, think common interest and work united. I myself am totally dedicated to the promotion of democracy.”

Later officials overseeing the visit announced that a lecture the Dalai Lama had been due to give on Tuesday in the southern city of Kaohsiung had been moved from a 15,000 seat stadium to a room at his hotel with seats for just 1,200.

“The main organisers were concerned about the Dalai Lama’s personal safety,” the Taiwan Dalai Lama Foundation said in a statement.

China has voiced strong objections to the visit, although it has not so far threatened any reprisals.

On Sunday a Chinese official responsible for Taiwan affairs was quoted as saying that it was “bound to have a negative influence on the relations between the mainland and Taiwan”.

The Chinese government says the Dalai Lama is a “splittist” fighting for Tibetan independence and it often reacts angrily to governments which allow him to visit.

Ma Ying-jeou, Taiwan’s president, who met the Dalai Lama during both his two previous trips to the island, has no meeting scheduled on this latest visit, his spokesman jas said.

“We have said before that there is no such an arrangement,” Wang Yu-chi told AFP news agency

Ma, who has come under heavy criticism for his handling of the typhoon, which left at least 571 people dead, approved the Dalai Lama’s visit last week.

The Dalai Lama’s visit follows an invitation from high-profile members of Taiwan’s opposition Democratic Progressive Party, which wants the island to become formally independent from China. 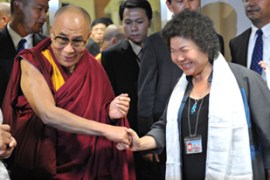