“We must exercise patience and seek people’s understanding because we are given such latitude,” said Hatoyama, who is virtually certain to replace Taro Aso as prime minister by mid-September.

The 62-year-old US-trained engineer campaigned on a promise of change and people-centred politics against the business-friendly LDP, headed by Aso, pledging to focus spending on consumers, cut wasteful budget outlays and reduce the power of bureaucrats.

Aso told reporters on Sunday night that he would step down as LDP president to take responsibility for the crushing defeat.

His likely successor faces tough, immediate challenges, such as trying to revive the country’s battered economy and steering a new course in relation with the US, Japan’s top ally.

“It’s taken a long time, but we have at last reached the starting line,” Hatoyama told a news conference at his home in Tokyo on Monday.

Speaking to NHK, Hatoyama confirmed he would form a coalition with smaller partners such as the Social Democratic party and the People’s New party, despite policy differences on security and other issues.

The DPJ’s win in parliament’s more powerful lower house on Sunday, combined with control of the upper house it secured in 2007 with some small allies, will end the deadlock in parliament that has plagued decision-making the last two years.

But the democrats, who will face an upper house election in less than a year, will have to move quickly to keep support among voters worried about a record jobless rate and a rapidly ageing society that is inflating social security costs.

Hatoyama is to set up a transition team to organise the change of government, but has said he will not announce his cabinet until he is officially elected prime minister by a special session of parliament, expected to be in about two weeks.

Analysts say the democrats’ spending plans might give a short-term lift to the economy, just now emerging from recession, but worry that its programmes will boost a public debt already equal to about 170 per cent of GDP.

Highlighting the economic challenges ahead, investors cheered the DPJ’s victory, sending the Nikkei-225 share index up two per cent to an 11-month high on Monday morning.

But those gains were given up by the midday break, with the benchmark index sliding 0.35 per cent.

Voters, having chosen the untested democrats for the first time, will likely want to see proof quickly that they can do a better job than the LDP.

Koichi Nakano, a professor at Sophia University, told the Reuters news agency that “it’s going to be crucial how they spend the first year in office, so in that sense they have to get focused very quickly to get things accomplished”.

“Otherwise, the goodwill may dissipate very quickly and they may face a hostile upper house within a year.”

The democrats have also pledged to forge a more equal and independent relationship with the US, raising concerns about possible friction in the alliance.

The White House said on Sunday that it was “confident that the strong US-Japan alliance and the close partnership … will continue to flourish under the leadership of the next government in Tokyo”. 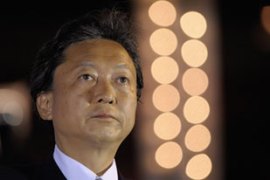 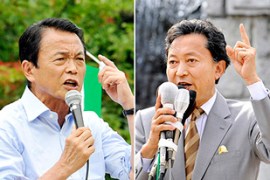 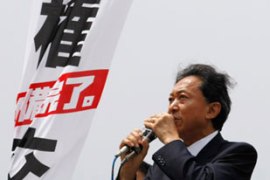 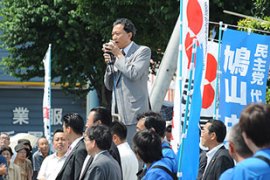