The Israeli reaction to the IAEA report comes ahead of an agency meeting due to be held in Vienna in the coming weeks and a special UN Security Council meeting on the prevention of nuclear proliferation, it said.

The IAEA on Friday hit back at reports that it had hidden information about Iran’s disputed atomic programme, in a rare public comment on the agency’s inspection work.

“Time and again unidentified sources feed the media and member states with misinformation or misinterpretation,” Marc Vidricaire, the IAEA spokesman, said in a statement.

“There are articles claiming that the (IAEA) secretariat is hiding information, and that there are sharp disagreements among staff members involved about the contents of the report. Needless to say, such allegations have no basis in fact.”

The Vienna-based agency said Iran is continuing to enrich uranium in violation of UN sanctions, though at a slightly slower rate in recent months, and met some demands
for better monitoring, but that it needed to address credible allegations of covert atom bomb research.

“Iran has not suspended its enrichment-related activities or its work on heavy-water-related projects as required by the Security Council,” the IAEA said.

The report also said the agency cannot exclude the possibility that there is a military purpose to Iran’s nuclear programme.

Iran is under three sets of UN sanctions for its refusal to halt enrichment, a process to isolate a uranium isotope needed to generate fuel for a nuclear-power reactor or, in higher concentrations, to make a weapon. Reactors use heavy water to produce weapons-grade plutonium.

The IAEA has “requested Iran to provide more substantive responses,” the report said. “Regrettably, the agency has not been able to engage Iran in any substantive discussions about these outstanding issues for over a year.”

Barack Obama, the US president, has said the Iranian government must respond by late September to his request for new talks on curbing its nuclear programme.

Last month, Iran said work was under way on proposals that may provide the basis for renewed talks.

The West suspects Iran is pursuing the means to produce atomic bombs behind the facade of a civilian nuclear programme.

Iran says it wants only electricity from nuclear power. It has rejected UN demands to halt its enrichment and has been hit by three rounds of international sanctions.

To help win Russia and China’s support for a further set of sanctions, Western powers urged the IAEA to release a classified summary of its inquiry into Western intelligence reports alleging Iran illicitly studied how to design a nuclear bomb, diplomats said.

Such a summary appeared to have been included in Friday’s report. But the IAEA has no evidence showing undeniably that Iran has a bomb agenda, a diplomat close to the IAEA said earlier this week.

The diplomat said Mohamed El Baradei had been loath to publish information that could be used for political ends and make the agency look biased against Iran.

El Baradei, a Nobel Peace laureate, retires in November after 12 years in office.

He clashed with the Bush administration over its policy towards Iraq and Iran, saying it was confrontational and undermined access for UN inspectors.

He said earlier this year the holder of the IAEA director-general post must have the “guts to stand his ground” and not bow to intense political pressure.

His successor, Japan’s veteran IAEA envoy Yukiya Amano, has said he has not seen any evidence in the agency’s files that Iran is seeking nuclear weapons capability. 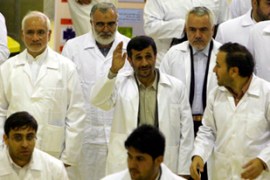 UN watchdog urges Tehran to address claims that it researched how to build atom bombs. 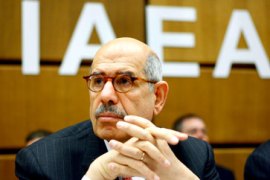 Outgoing IAEA boss speaks to Al Jazeera on the challenges ahead. 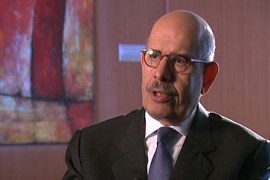 Months before he steps down, Mohammed el-Baradei talks about threat to world security.