The ship, called the ANL-Australia, was Australian-owned and flying a Bahamas flag.

“Based on past experience … we don’t expect a very detailed response,” one of the diplomats said on condition of anonymity.

The diplomats said the Australian firm whose ship was seized is controlled by a French conglomerate and the actual export was arranged by the Shanghai office of an Italian company.

The diplomats did not name any of the firms involved.

“The cargo was deceptively labelled,” said a diplomat “The cargo manifest said that the ship contained oil boring machines. But then you opened it up and you found these arms.”

The UAE mission to the UN declined comment on the case.

Jim Walsh, an international security expert with the Massachusetts Institute of Technology’s security studies programme, said the UAE’s move was unusual given its ties with Iran.

“They have very close economic relations and there a large number of Iranian expats who live in the UAE,” he told Al Jazeera from Boston.

“Its unusual because it puts the spotlight on the Iran-UAE relationship in a way we never seen before and it has implications with North Korea when it seems to be on some kind of peace offensive.

“It [also] asks all sorts of questions about why Iran would be buying hot goods from North Korea when everyone is watching what North Korea does.”

Diplomats said both North Korea and Iran appeared to be in breach of Security Council resolution 1874, which banned all arms exports from North Korea and authorised states to search suspicious ships and seize and destroy banned items.

The resolution was imposed after North Korea’s second nuclear test in May.

Balbina Hwang, a former state department adviser for Asia, told Al Jazeera that the seizure was significant because it was the first incident since the UN resolution within the Middle East region.

“First, I think that it’s a very important indication that countries within the Middle East are willing to support the UN and the international community regarding an issue that some have tried to make as regional issue, in other words, the North Korea nuclear issue, so this is a very important step in enforcing international agreements and sanctions,” Hwang said.

“As soon as UN resolution 1874 was announced, North Korea immediately reacted belligerently by stating that they would not accept these sanctions and any future effort to enforce these sanctions by the international community would have taken by North Korea as an act of war.

“That was an extremely aggressive reaction from them and one would expect that Iran would react strongly if there were reports that portions of goods destined for Iran were seized and yet we have not heard any negative reaction publicly from either one of these governments.”

The Security Council imposed sanctions on Pyongyang after its first test in October 2006, but the measures were never enforced, mainly because China showed no interest in seeing them implemented.

Diplomats said the UAE seizure, which was done on the basis of the country’s own intelligence reports, was an important success for the beefed-up North Korean sanctions regime and would hopefully deter further attempts at skirting sanctions.

Tehran has also been punished with three rounds of UN sanctions for its nuclear programme, which Western powers fear is aimed at producing atomic weapons.

Iran says it has a peaceful atomic programme that will generate electricity, not bombs. 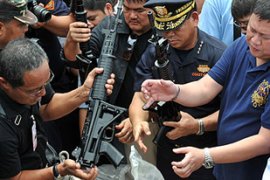 Arms seized on ship in Philippines 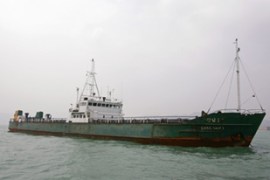 Freighter tracked by US navy believed to be headed back to North Korea.