The prince, who is the son of Prince Nayef bin Abdul Aziz, the man thought likely to be Saudi’s next crown prince, was only lightly wounded in the attack.

Hussein Shobokshi, a columnist for the London-based Asharq Al-Awsat, an Arabic newspaper, told Al Jazeera the attempt on the minister’s life had taken the “war on terror” to another level.

“It has also created an incredible amount of sympathy for the government,” he said, adding that the response from the government was likely to be “strong, consistent and with enormous popular backing”.

The bomber was a wanted man who had previously expressed his intention to give himself up to authorities, the Saudi Press Agency said.

The bombing was the first assassination attempt against a member of the royal family in decades and the first significant attack by fighters in the kingdom since 2006.

“The attack indicates that the threat is out there waiting to happen – sometimes at closer range than you would think,” the Reuters news agency quoted one unnamed Western diplomat in Saudi Arabia as saying.

“The royals will have plenty of reasons to worry in a country where weapons apparently find easy entry from porous borders to the north from Iraq, or the south from Yemen.”

Al-Qaeda fighters, including those returning from Afghanistan and Iraq, have established sanctuaries in Yemen, particularly in three provinces bordering Saudi Arabia.

Saudi Arabia has waged a campaign against al-Qaeda in the country, killing or capturing most of its leaders after a string of attacks that started in 2003.

Earlier this month, Saudi authorities announced the arrest of 44 people thought to be linked al-Qaeda and the seizure of explosives, detonators and firearms.

Human Rights Watch has criticised the country for detaining thousands without charge while Amnesty International said the state had committed human rights violations on a “shocking” scale as part of its crackdown. 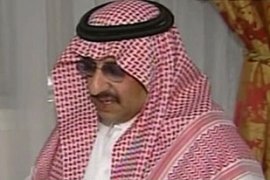