So far the two countries have held more than 20 reunions, bringing tens of thousands of people together.

Kim said the main topic of discussions with the North Korean Red Cross delegates would be “the dispersed family issue”.

However, Kim said he would also try and push for talks with Pyongyang on “other humanitarian matters as much as we can at our level”.

According to the Yonhap news agency, the talks would be held at the North’s Mount Kumgang resort, the usual venue for the reunions.

The reunions were last held in 2007, but were stopped when inter-Korean relations deteriorated with the inauguration last year of Lee Myung-bak, the South Korean president, who linked aid to the impoverished North to denuclearisation.

But the recent North-South discussions on family reunions signal a softening of tension in cross-border relations. Over the past year, North Korea stoked tensions across the Korean peninsula with nuclear and missile tests.

However, in recent weeks, the North has put forward a series of conciliatory gestures, such as releasing a South Korean worker held for more than four months and agreeing to lift restrictions on border crossings.

The North also freed two American journalists following a trip to Pyongyang by former Bill Clinton, the former US president, earlier this month. 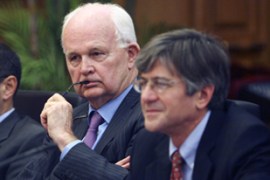 Reports say North Korea has invited US envoy to visit for talks on nuclear programme.